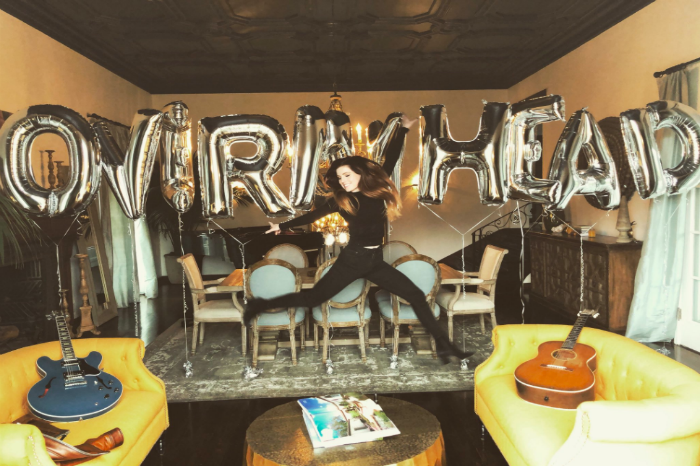 On March 16th, Echosmith, the sibling trio from California, released their first single since their Inside A Dream EP and the first official single off of their Inside A Dream album aimed to be released in the summer. The previously unreleased awesome new song “Over My Head” was teased on the band’s Twitter and Instagram accounts, along with Sydney, Noah, and Graham’s personal accounts throughout the week prior.

The song was released alongside with a latte-filled lyric video gathering the latte art skills of Melannie Aquino and the coffee of Lavazza and Highlight Coffee.

On March 20th, the band released the official music video for “Over My Head” where they wore the matching black turtlenecks that they wore in the album art for the song. The video features their iconic block letter lights used on their tour, which spell out “Echosmith,” along with Graham playing the drums.

the #OverMyHeadVideo is here!!!!🌙🌙🌙 this is our favorite video we’ve ever done… https://t.co/ZhL3LcK54p

Ahead of the video, Noah Sierota released a thankful, inspiring statement from his personal Instagram that, since then, has been posted onto the band’s Instagram and Twitter accounts:

You guys are all so special. It’s been such a joy to get to know so many of you. Here’s a little message from Noah. pic.twitter.com/PgBMA5wIu3

The band is currently heading out on radio promo to prepare for their long-awaited upcoming Inside A Dream North American Spring Tour starting on April 4th in San Francisco, CA at The Regency Ballroom and ending May 12th in Hollywood, CA at the Fonda Theatre. The band has not done a North American tour since spring 2015 for their late 2013 release “Talking Dreams.”

We’re going on tour. Get your tix @ https://t.co/yvDJoQkNgW ❤️ pic.twitter.com/ptxiZV8m4Q

Watch the latte lyric video for “Over My Head” HERE:

Watch the new music video for “Over My Head” HERE: