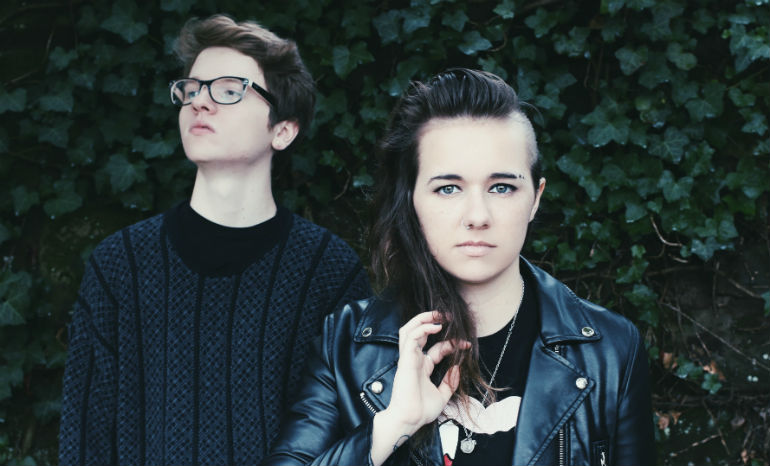 Maeve Gorman and Connor LeFevre didn’t start their band Semblance in your average way. Their garage band days were spent over the internet, sending over demos and ideas via email while crafting their work together. When they finally met in person, their collaboration was stronger than ever as they began to gear up for their debut EP, I Love You. This release showcases the young pair’s unique beginnings and artistic versatility, leaving a lot to learn about the interesting background of Semblance. Soundigest had the opportunity to ask Maeve and Connor a few questions about writing music together online, the ups and downs of being 17 years old in the industry, and what to expect from their debut release.

The origins of Semblance started on the internet. How did you two come together online and how did you manage to write music together while being so far away?

M: I had placed an ad online for band members because I was having a tough time finding people in my hometown that agreed with me sonically. We started trading demos by email and went from there.

How has this long distance relationship inspired your songwriting?

M: I don’t think it’s changed anything dramatically from any other band dynamic. If anything it allowed us to have more time to develop ideas before showing them to each other.

C: I don’t think it has really changed anything in our songwriting other than the obvious difficulty in sharing ideas – we can’t always work on it with each other and talk about it in real time.

What was it like to meet in person for the first time? How did the songwriting dynamic change?

M: It wasn’t too eventful really. We had already been writing by the time we had our first practice and it didn’t really affect our songwriting dynamic either. However, it did allow me to be a little less reserved when it comes to sharing ideas.

C: The first time we met was very uneventful like Maeve said, but I think our songwriting changed in that we were able to give our own opinions and make decisions right there in the moment.

You both are very young starting out in the music industry, both at 17 years old. What have been the advantages and disadvantages of this?

M: The advantages are that we have more time get where we want to be. I’m not trying to say that being older would mean that we couldn’t pursue our goal, but it definitely provides more leeway for setbacks and bumps in the road. The disadvantages tend to be more or less the same and that’s mostly that people underestimate us. People expect a less mature/developed sound because of our age, which can be frustrating.

C: We really don’t have much responsibility as we don’t have to support ourselves or give ourselves a home, but there are a lot of disadvantages. For example, we have other things to focus on like school and family relationships, and having to deal with being “just kids” is a major bother.

You’re also at an age where you are still discovering who you are and developing your style. How has this impacted your music and your personal brand?

M: Personally I know what it is that inspires me and what I find appealing, so I try to present myself and my “brand” in that same light. I think it carries over to Semblance too.

C: Semblance is definitely an experiment in that we are always trying to come up with new ideas and sounds that can expand the image of the band. I try to develop my own personal brand by just following what inspires me and what I have a passion for. I think the constant ebb and flow of our artistic identity is what makes us special as we have lots to give.

You just released your new single “Angel” in anticipation of your debut EP release, I Love You. Why did you choose to release this track first?

M: I think we landed on “Angel” as being the first single because it represents part of our sonic goal/concept really well, along with being at least somewhat catchy.

What can we expect from this debut release? How do you think it represents the beginning of Semblance?

M: I think you can expect a little bit of everything. I know it was an unspoken goal to try and diversify the EP because more often than not, EPs can sound pretty similar throughout as opposed to an album. So we tried to give each song it’s own personality while making sure it still worked together.

What are some goals Semblance is trying to hit in 2018 and what plans are you most excited for?

M: We have some things in the works, but I think finally getting on stage is what we’re looking forward to most.