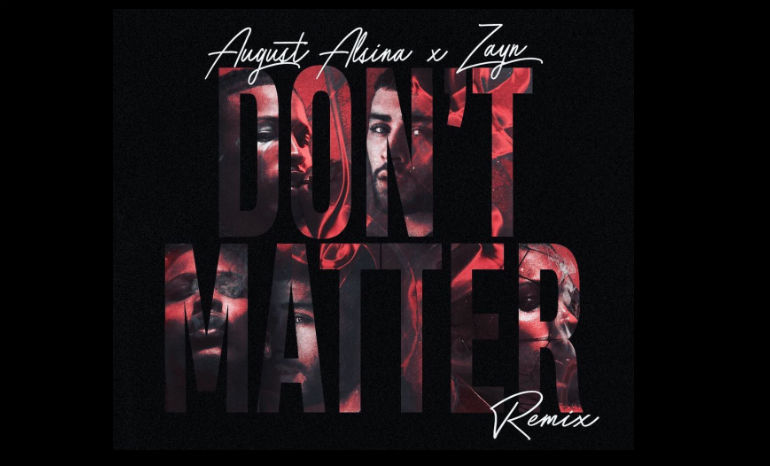 Before the leak of the track was able to make way through the internet, Zayn Malik released the remix to August Alsina’s “Don’t Matter,” off of Alsina’s next album entitled, Drugs.  Zayn addressed the leak on Twitter before posting a free download of the remix to his website.  Calling the song leak “unprofessional” and expressing that “my fans mean more to me than a stupid leak,” the former One Direction member crashed his website with the surprise release.

This was not a song I intended to put out, but due to unprofessionalism has been leaked by someone and my fans mean more to me than a stupid leak, so here it is free for you to enjoy, before my music drops https://t.co/M7NZnlGBw7 🙂 love z pic.twitter.com/ggYMqaKlC9

Alsina also replied to the surprise track drop from Zayn earlier this month.

Zayn, I’m sending an abundance of love to you! You are my brother, I am yours. I don’t know how this happened but WAY TO MAKE LEMONS INTO LEMONADE. (& a great batch, might I add) 😂😭🙏🏽 we do great work together. ❤️⚡️ Mashallah King! https://t.co/fRzaIdIUD4

This track is the remix we never knew we needed but are so glad it was given to us- and by Zayn himself. Trending on Twitter the night of its release, the track is the perfect mix of the two R&B singers’ vocals, making for an amazing collaboration. Adding a verse into the song that was dropped over the summer by Alsina, Zayn takes on mature themes and a play on words about the late singer Aaliyah.

With lyrics like, “Dive in the ocean, we rocking’ the boat// Girl, you look like Aaliyah to me yeah// One in a million, you’re one of a kind,” along with Zayn saying “baby” multiple times- it was enough to make our hearts melt!

Fans were super grateful for this sexy collaboration even though Zayn didn’t intend for it to be released. The mid-tempo track is accompanied with smooth vocals by both artists making an amazing vibe for the song. It makes us wonder just how well this would’ve done on the radio and on the charts!

With the singer teasing fans recently with video clips and poems, Zquad is hopeful for a new album soon. August Alsina fans are also currently awaiting his new album as well. In November of last year, the singer tweeted about his record label, Def Jam, holding him and the album hostage, resulting in the album limbo that fans are seeing right now. While we’re waiting for both artists to release new music, check out the “Don’t Matter” Remix here.