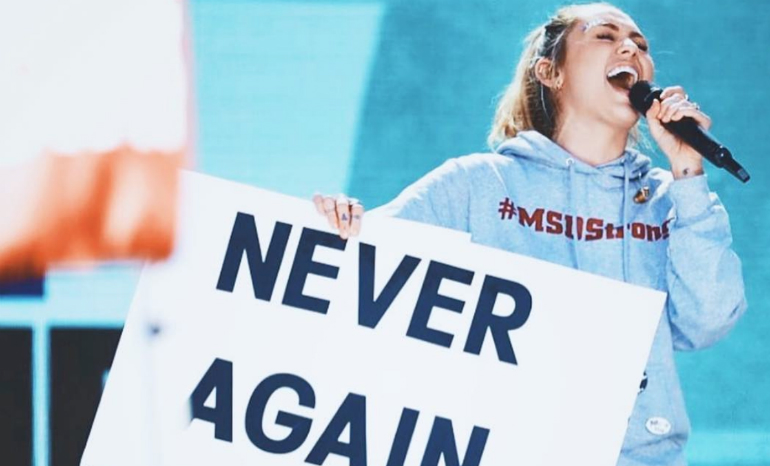 On March 24, 2018, thousands of people rallied together to march and take a stand against gun violence in demand of more gun control. Throughout the country, there were about 800 marches taking place in various cities. Everyone from students, parents, survivors, teachers, children and celebrities all worked together to take a stand in hopes of making a change. Looking forward, we can only hope that, following the powerful march, policymakers listen and help to drive out such hatred. Children should be able to feel safe while in school, and they should never have to fear for their lives while getting an education.

Although the message was loud and clear when the victims first announced the march, many musicians joined the marches and brought even more attention to the gun control issue, including Miley Cyrus, Camila Cabello, Selena Gomez, Demi Lovato, Halsey, Ariana Grande and so many more. We watched as celebrities, victims, and supporters of more gun regulation rallied together in unity.

One of the many performers of the day included Ariana Grande, who performed her song “Be Alright” at the march in Washington D.C. Ariana has been lying low for quite some time, but she made sure to come out for this very important cause. It hasn’t even been a year since 22 lives were lost at one of her concerts in Manchester, and of course, supporting a cause that puts the lives of children first is still at the forefront of her mind. Ariana was uplifting and sweet, and the singer even took time to acknowledge the students. She even made time to hang out and take pictures with students from Marjory Stoneman Douglas High School following her performance.

Check out her performance HERE:

Other performers in D.C. included Lin Manuel Miranda, Ben Platt, Jennifer Hudson, Miley Cyrus, Demi Lovato, Common, Andra Day, and Vic Mensa. All of those celebs used their powerful voices to take a stand in fighting for stricter gun laws. Hopefully, with all of the powerful voices that were heard in D.C. and throughout the entire country, the victims of gun violence will finally see change in their lifetime.