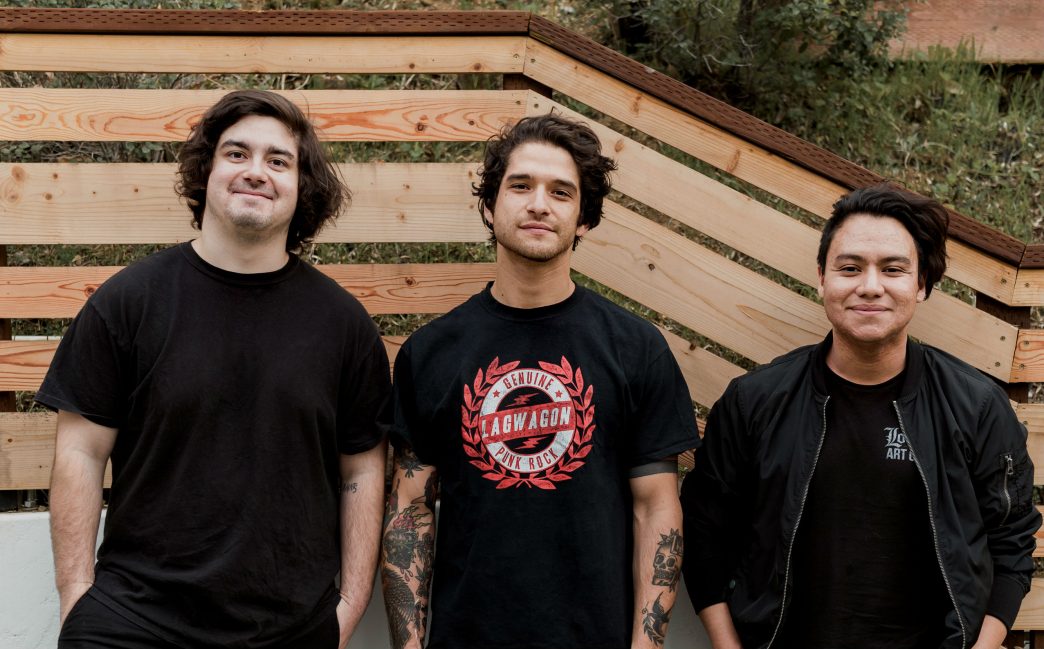 Into older pop-punk music like the ’90s era of blink-182 and Green Day? Well, we have a great surprise for you! Tyler Posey of Teen Wolf has a punk side to him and he has decided to join forces with Freddy Ramirez and Nick Guzman to form PVMNTS. PVMNTS has been a work in progress, to say the least. It’s taken the band a few years to really get on their feet, but soon enough, they’ll be overseas and taking over in the United Kingdom! Recently, I got to chat with the guys of PVMNTS about everything from blink-182, underground shows, how they got started and WAY more. Check it out:

First off, how did you guys meet and what made you want to form a band together?

Tyler: Freddy & I, we met this band – these two dudes – they needed a bassist and a guitarist. I wanted to audition for the band because I wanted to be in a band and play some live music. So we met through that band and we quit that band and started another one like, 6 or 7 or 8 years ago! We ended up selling out some shows at The Roxy on Sunset [Boulevard] and kind of doing mini tours all throughout California. Just did some really cool sh*t with that band. We split that band up, our second band and focused on work for a few years and financially getting to a point where we could play music again seriously. We started this band, PVMNTS, a little over 2 years ago, maybe.

Freddy: Yeah, around that time!

Tyler: And what made us want to play music? I love it, I love it! I grew up in Southern California and grew up skateboarding and listening to punk music. It was really just a popular genre when I was growing up and it just fit really well with my lifestyle as a kid. It just inspired me to be a part of it and I’ve always wanted to be a part of it. It’s rooted into my bloodstream!

Nick: Let me tell you about what got me into music…4 years later…No, I was just a kid dealing with not necessarily the worst life. I was just feeling extremely down and I remember the exact moment that I knew I wasn’t just listening to music casually; I was really into it. I was sitting at a bus stop in like 9th grade, 8th grade, feeling really sad and I was listening to the Three Cheers for Sweet Revenge album by My Chemical Romance and I heard the song “Cemetery Drive”…I was just… I wasn’t bawling at a bus stop but water started coming out of my eyes and I’m like, “I’m so into this!” And that was the moment that changed everything.

Freddy: For me, I kind of always did music and shit as a kid. I was doing the whole stereotypical thing like the pots and pans. That was me! I guess whenever I would play with my little action figures and Hot Wheels and shit I used to sing these backtracks to these songs that supposedly those action figures would play on, almost like a video game in a sense. I mean, I don’t think anything really got me into music. I always had it until I started listening to blink-182 when I was younger. I started playing drums because of “All the Small Things.” It’s kind of progressed and now I’m here!

All good stuff! Where did the band name come from?

Tyler: We were f**king around with a bunch of names and didn’t really know where to decide. We really liked the idea of choosing a name from one of our favorite lyrics or just a lyric we liked from another band. We were juggling around with a bunch of lyrics from these songs and one of them had the word “pavements” in it. We really liked that name but there’s another band with that name, Pavement, I think.

Nick: Yeah they came from California in the ’90s. Look them up, they’re good!

Tyler: Look them up, good band! But we really liked the name and how it sounded and we kind of decided at one point, we had this epiphany to remove all of the vowels from the name. It made it look badass and it hopefully stopped any copyright issues we would have with the other band.

Freddy: If The Weeknd did it, so could we!

Tyler: Yeah, exactly. We were inspired by Fun. Fun. put a period at the end of their name. We were inspired by all of these bands that add nuances to make their names original. We think it looks really cool, especially when we put this slash in the V to make it look like an upside down A. The name itself acts like the logo so it was kind of a perfect situation.

Nick: I don’t think we really planned it, right?

Tyler: No, definitely didn’t plan it.

Nick: Yeah, it just kind of happened. It so happened to be great!

Alright, cool! So, “Jumping Stairsets” is very reminiscent of ’90s blink-182. It’s safe to say they’re one of your inspirations, right?

Yeah, I was listening to Cheshire Cat and I was like, “wait, that kind of reminds me of their song…” So it all kind of clicked!

Who or what else inspires your music?

Tyler: We have a lot of influences from that era, like when blink-182 was really big. New Found Glory, Sum 41, all of those bands I think are influences. There is a different sound that modern day punk has nowadays.

Tyler: It’s a little more technical. The drums are more involved and quicker.

Freddy: A lot quicker than it used to be.

Tyler: We’re really inspired by bands like The Story So Far to fill out that modern punk sound. Knuckle Puck, Neck Deep. At least for me, I still want to write where it comes from the pop-punk ’90s era. A lot of influence from Sheryl Crow – she has a really cool ’90s sound and it fits well with punk, I think.

Tyler: Dido is really cool, too.

Cool! Alright, so you guys are gearing up for a bunch of UK shows soon, including Slam Dunk. How do you guys feel about all of that? You’re just jumping overseas first!

Tyler: That’s an understatement. I was kind of up until 4 or 5 in the morning running everything through my head and envisioning it all and stepping out on stage and playing in the UK and just every little detail. I’m really, really, really, really excited! I’m excited to start off the band in the UK. They’re really gracious there. They’re huge fans of punk music so they know where we’re coming from. We fit in there. It’s nice to kind of start off there!

Nick: It was an odd situation too, to start off there, because normally bands start off in their hometown or in their state or wherever they’re from.

Freddy: Yeah, it kind of happened so perfectly.

Nick: Yeah, it happened so fast where it was like, “oh yeah guys, you’re going to the UK!” Let’s do this!

Yeah, at least with Slam Dunk, you guys are playing on the same stage as Four Year Strong and Speak Low If You Speak Love, so it’s not like you’re by yourself with little acts either.

Tyler: Yeah, that’s insane to me. So crazy! Slam Dunk is insane. I think that’s the thing we’re the most grateful for. It’s cool. We’re good friends with Ryan from Speak Low and State Champs, so that will be really, really, really fun to kind of share the stage with one of our buddies and people we look up to so much. I’ve covered songs by Four Year Strong before, and I’ve seen them live countless times. It’s just really cool that we’re genuine fans of this music and these bands that we get to share the stage with. I’m super f**king happy! I’m excited and nervous!

Freddy: Yeah, it’s super awesome to play the Slam Dunk stage with all of those great bands. But, oh my god – The Faim just released another song and we’re doing some shows with them. The Faim is so great!

Nick: I’m so stoked to play with those dudes!

Exciting. So aside from the UK, can we expect any US shows soon?

Tyler: Trying! We’re definitely trying! We’ve got a lot of connections, a lot of friends. We might do a little pop-up show at some point; find a tent and an outlet and plug in and play until we get stopped! We’re trying to set up these backyard house shows and underground house shows like this crazy hardcore punk crazy crowd atmosphere shows. Yeah, just so we can start doing shit and get going and get used to playing shows and go to the UK.

Freddy: We’re recording an EP at the end of this month, so we might do a little release show. We definitely have plans to play, just nothing set in stone yet.

Freddy: Yeah, super soon! We’ve had plans to get in the studio for a little bit.

Awesome! Anything else you guys would like to add?

Tyler: We’re going to be playing in The Great Escape [Festival] also! It’s a festival we’re getting the chance to play in the UK. We’ve got a bunch of tours we’re talking about doing. We’ve got music videos being talked about. We’re collaborating with a tattoo artist about some logo ideas, merch ideas.

Nick: Overall, we’re really stoked about everything that’s going on with the band and we’re super thankful for everything that’s happened so far. Even with the little amount of music we have out right now! Every opportunity that we have is insane and we just appreciate everything that has been done. Our team and everything is absolutely killer! It’s gonna be a good time and I can’t wait to show everyone what we’ve been working on for years. We’re hoping that they’ll love it and we’re hoping we can keep doing this for as long as we can!

All photos by Lauren Brown