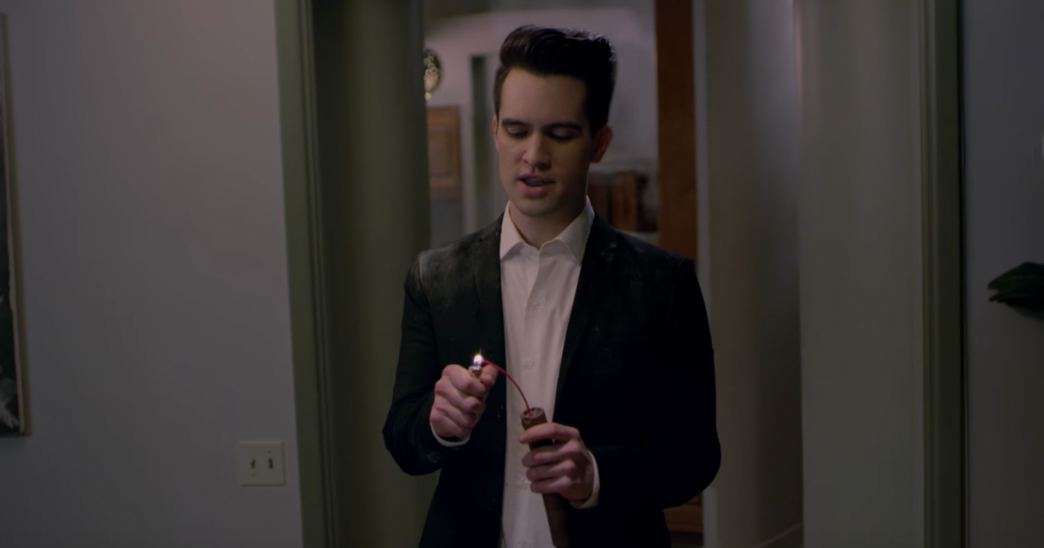 In the same vein as their hits “This is Gospel” and “Hallelujah,” Panic! At the Disco recently came out with yet another song with a religious theme, “Say Amen (Saturday Night).” The track is the lead single off their upcoming album, Pray for the Wicked, out on June 22, 2018. Like many of their previous works, the music video for “Say Amen” follows the ever-energetic lead singer Brendon Urie as the main character in a grisly yet comedic sequence of events.

The video begins with a breaking news alert, with the anchor-woman reporting on the theft of an powerful ancient artifact known as the “Devil’s Key,” which has “caused more death and destruction than any war known to mankind.” As the exposition plays in the background audio, we see a group of men wearing ski masks tiptoeing through a house, knives in hand. They prepare to descend upon Urie, who is entirely unfazed as he saunters out of the bathroom with the Devil’s Key dangling on his necklace. True to the reporter’s words, the promise of inevitable catastrophe is fulfilled in the following scenes.

Step right up and be the first to see a new little action movie to celebrate (because why the fuck not??), watch the video for “Say Amen (Saturday​ ​Night)” directed by Cloud + @spencersusser on YouTube.com/panicatthedisco Once you’re done watching, listen to another new song off the record "(Fuck A) Silver Lining”.

An upbeat, repetitive vocal backbeat kicks off the song and after Urie sings the line “And I can’t change into a person I don’t wanna be so//Oh it’s Saturday night,” he begins to tackle each of the masked men through a series of violence acts, all while getting ready for his girlfriend’s birthday. He thrusts knives through heads, uses a cleaver to chop off a hand, and creates multiple explosions as he wreaks havoc around his house. The burglars’ clumsiness contrasts comically with Urie’s fluid movements, and his unfortunate victims receive no mercy from him. The fight choreography is swift and clean, reminiscent of the action scenes in the Kingsman films. The gore is not lacking either, with blood spurting across the walls in every room à la Monty Python and the Holy Grail. Urie’s on-screen killing spree fits surprisingly well with the lyrics, which unapologetically declares his independence and the contradictory phrase “Swear to God, I ain’t ever gonna repent” in the chorus.

The twist is revealed at the end when Urie’s girlfriend finally arrives at his house. The couple’s passionate embrace turns sour as soon as she sees his necklace, giving him an aggressive kick in the crotch. The joyous tone of the final lyrics (“Oh, it’s Saturday night”) are capped off with the sound of a baseball bat swung at Urie’s head before the woman swipes the key for herself. Ultimately, Urie is left in a bloody mess on his floor, stripped of the item that had given him so much power, sirens blaring in the background.