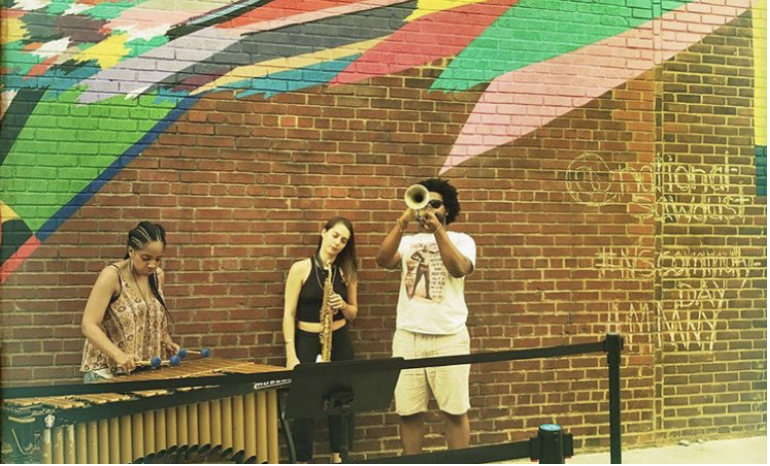 Much of the charm of a place like Brooklyn comes from discovering what secret events hide inside seemingly mundane brick buildings with colorful street art plastered on their walls. Wandering the streets of Brooklyn’s culturally booming neighborhoods you may ask yourself, “What exclusive functions could I attend if I were lucky enough to be in-the-know?”

Once a hollowed out shell of an old factory, National Sawdust is now a modern music venue and the home of a monthly performance series entitled The Revolution. This series highlights local musicians of Brooklyn and Harlem, fostering a community between them while providing a platform to showcase original material. On Saturday, March 24th, The Revolution celebrated its twenty-fifth volume and two year anniversary. The night’s five acts (Dot Cromwell, Beccs, Meridian Lights, Elle Winston and MAE.SUN) had all been featured in the past and were asked to return to commemorate this milestone for the local movement.

The founder, curator and producer of The Revolution is Katie Jones, an insider of the Brooklyn/Harlem music community. Jones states that she was inspired to create the series after noticing a void of opportunity for locally-based artists.

Having only heard about this anniversary event through a lucky invitation, I was clueless to the type of night I was in for. Like most lay-people wandering Brooklyn, I was generally ignorant to the underground community of musicians embedded in the neighborhood. And, if I’d continued to drink Japanese beer at the ramen-shop around the corner all night, I would have remained unfortunately ignorant.

Once inside and past the box office of National Sawdust, the venue opens up into a wide and picturesque theater. New York Times writer, Zachary Woolfe, described it as, “A futuristic forest clearing . . . that brings to mind what an experimental Brooklyn arts space might look like on a television show, all angular lines and moody lighting.”

I purposely avoided the bar next to the theater, expecting the drink prices to put me into crippling debt. However, when my friend pointed out a list of specials I changed my course and happily settled for a 19oz can of Founder’s for $5. While waiting for my beer I struck up conversation with another audience member, Dommy. He gave his impressions of the hip-hop opener Dot Cromwell and talked about how he wound up at The Revolution Vol. 25.

“He’s a talented performer and this is such a great location,” Dommy said. “But I never would have found out about this on my own. I heard it from a friend.”

Dommy was not the only one who heard about the event through word-of-mouth. At least two other audience members I approached during the night said they’d come to support a musician that they knew on a personal level. Founder, Jones, later commented on this tight-knit vibe as exactly in line with her intentions.

“It’s about this internal musician community more than anything,” she said. “It becomes a secret haven where everyone can let go and live free for the night.”

The first performance I witnessed in full would set a precedent for the rest of the evening. Beccs stood on stage with her band silently, at first, before beginning their mix of hypnotic melodies and tripped-out grooves. Much of their performance was reminiscent of The Doors, especially with the talent of her band’s keyboardist, drummer and guitarists. Beccs herself captured this essence as well, dancing and shaking her body as if Jim Morrison’s spirit was within her

A post shared by b e c c s (@beccsmusic)

Afterwards Beccs commented on her history with The Revolution, and spoke candidly about its significance for local artists.

“I saw the first Revolution show and I was blown away,” she stated. “I’ve been coming back ever since, but more importantly, the series treats their artists so f*cking well. They look out for artists that are saying real sh*t at an important time. I’m always dumbfounded by the concerts.”

Suddenly a guitar sounded and Beccs excused herself, quickly running away to get a good spot for the next act, Meridian Lights. The four-piece had a straightforward sound, seemingly with roots in popular bands of the 80s and 90s but with a soulful twist.

The singer of Meridian Lights, Bradley, was dressed suavely; as if he’d come straight from a GQ photo-shoot. At one point on stage he voiced some gripes about how getting old sucks. He said he still remembers the days when he could jump around without feeling pain in his joints afterward. Still, when it came time for the band’s high-energy closer, “Rodeo,” he danced without inhibition.

Next up was singer-songwriter, Elle Winston. She announced foremost that her performance would feature a visual collaboration with a French artist and archivist. During the set historical photographs of civil rights movements flashed on a screen behind her.

Winston’s voice was smooth, and was propelled to great heights thanks to harmonies from her second singer. Her set was not without surprises, at one point blending a cover of Kendrick Lamar’s “Yah,” into a slow jam. The rest of her band was also given ample opportunity to shine with solos, including one from guitarist Julian Litwack. Litwack later stated he’d played The Revolution two times before, and greatly admires the setting.

“There’s always a pretty hip crowd, and a musically diverse lineup that many seem to appreciate.”

I considered leaving the theater for a moment before the final act, MAE.SUN. It crossed my mind that the line at the bar was likely short, and I assumed I was starting to get a general impression of what The Revolution had to offer. I was completely wrong, however.

I stopped dead in my tracks as soon as Hailey Niswanger of MAE.SUN took the stage with her soprano saxophone. She announced that once their music began there would be no breaks, and that everything the audience was about to hear was unreleased as of now. What followed was nothing short of an epic experience. For over thirty minutes MAE.SUN played a non-stop mix of experimental jazz and funk. Niswanger spent a few moments gently singing, but more often than not she’d burst out saxophone solos that were impressive to the point that they were perplexing.

I left the theater with wide eyes. They were frozen in astonishment from watching MAE.SUN, as well as the other acts. Yet, most of the audience around me was still relatively casual; I was one of the few who seemed to have had his mind completely blown out of his head. It became clear this wasn’t the first time many of the audience members had seen such an arcane performance.

Those who were new to The Revolution approached Katie Jones at the end of the night. She was thanked repeatedly by artists and audience members alike for an experience that felt as authentic as it was exclusive. Jones stands by her intention to create a musical sanctuary for artists in the community, but she gladly offers ways to get in-the-know about future installations in the series.

The Revolution Vol. 26 is scheduled for April 28th at National Sawdust. More info can be found by following @kjfromva on Instagram, The Rev Music on Facebook or by visiting nationalsawdust.org.