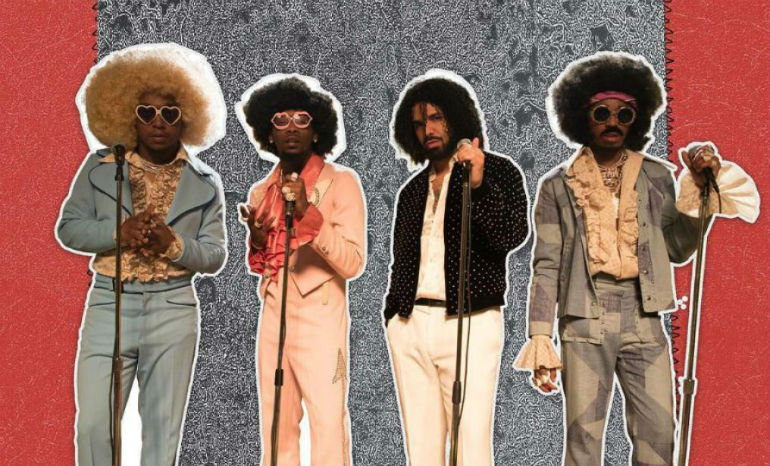 Migos changed things up with the video for their newest single, “Walk It Talk It.”  This is the most recent single off of their new album, Culture II.  Taking it back to the ’70s and heavily inspired by Soul Train, this video is filled with just the right amount of disco-filled moves, bell bottoms, afros, heeled shoes and roller skates. Paying tribute to the Motown era and the shows that allowed families to watch concerts on their television sets, the visuals for the song took us right back in time.

Opening with Jamie Foxx as Ron Delirious, a play on Don Cornelius, the host and producer of Soul Train. Foxx is the host for a dance show named “Culture Ride.” Migos can be seen in their time fitting attire donning amazing wigs to make the scene even more believable. Drake also makes an appearance during his feature on the track. He can be seen making his way down the soul train line showing off Michael Jackson-eque dance moves. Plus, his outfit was just as fitting for the era!

On the phone with @champagnepapi and the @migos… they said the video “walk it talk it” is 🔥🔥🔥…. I told them everythang is GUCCI!! “Ron Delirious” aka “Ya Dig” #backonmyfunnyshit #yadig #everythangisgucci #priverevaux

In the middle of the video, Foxx has the track stop for a comedic interlude as two dancers decode a word scramble resulting in the phrase, “Dat Way,” because it wouldn’t be Migos if that phrase wasn’t included somewhere. After the dancers celebrate their victory, the song starts back up with Offset showing off some of his dance moves, which included some robot moves and some popping and locking to the beat of the track.

So far, the video has over 30 million views on Migos’ official Vevo page, and fans are absolutely loving the concept.

How could you not like the Walk it Talk it video?

You’re probably wondering how this modern hit fit with all of that ‘70s flair, and it went surprisingly well! Check out the video for “Walk It Talk It” HERE: