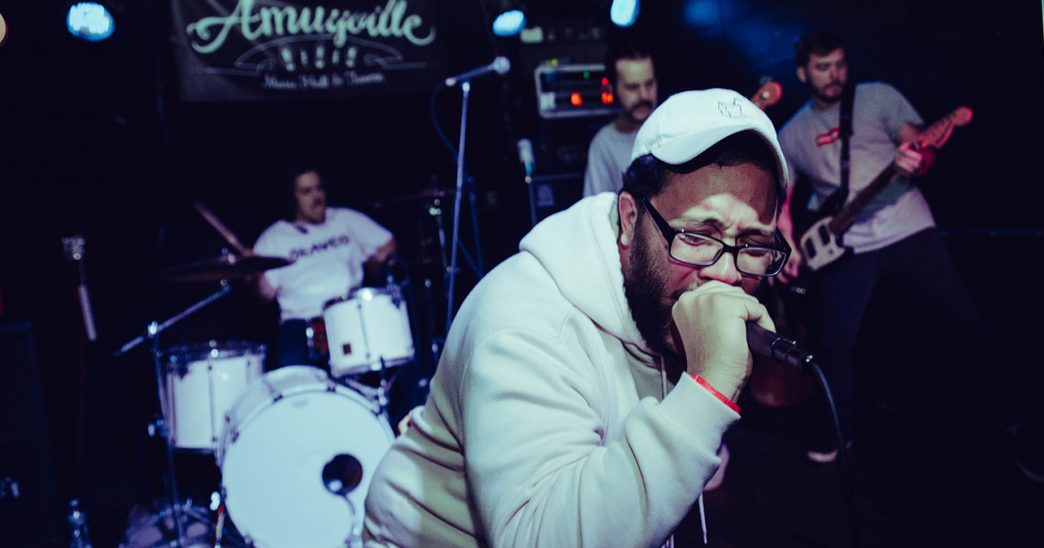 Have you ever heard an artist for the first time and instantly fall in love with their music? Well, that’s what happened to me a few years ago when I first watched the music video for “Girlfriend” by Orlando-based pop punk band, Hungover. Since then, the band has toured through the United States, opened for All Time Low, signed to Smartpunk Records, and just re-released their EP WILT.

Most recently, though, I got the chance to hang out with the band while they were on tour to chat about the EP, the tour life, and the Orlando music scene. If you’re a fan of Fall Out Boy, All Time Low, Mayday Parade, or Motion City Soundtrack, you will definitely love these guys. Check out the interview below and definitely be sure to check out WILT!

You guys recently signed with Smartpunk. It’s only been a little bit but how does that feel and what are you guys most excited about when it comes to being signed?

Marc: I’m stoked on it! Well, one, they’re located in Orlando. We kind of lucked out there because we can annoy them as much as we want!

Marc: It’s very convenient and it almost makes them more involved with our band. They’re very personable and they care about our band professionally, obviously, but also on a more intimate level which is cool.

Austin: Yeah, I mean that’s why we signed with them because they’re so close to home.

Austin: They’re our label but also kind of our friends!

Cool! So WILT’s being re-released with some new songs on the 30th. What was your reasoning behind the re-release, rather than just all new music?

Marc: Well, while we were in talks with Smartpunk, one of the things that came up frequently was that the five songs that we initially released were good and they recorded well, the quality was good and they were catchy songs that people could relate to and people gravitated towards, but they didn’t have the proper distribution and the team behind it to really get the music out there and to as many people as it could possibly reach. So, what we did was we decided to give it a proper release, put it out on vinyl, do new artwork, get it remastered. We added the three new songs to give people who already are fans of our music more music and kind of a look into the future to see where we were headed… and to punctuate that sound we put on the EP initially. It’s more mature but it’s expanding upon the sound instead of separating from it.

Austin: It’s like expanding on the same idea and really trying to say something new.

Gabe: Which we needed!

Who and what inspired the EP and the new songs?

Marc: Well, the whole EP is about making progress in life and letting go of negativity in the past in order to move forward. WILT is an acronym for “when I lose touch,” and it’s about losing touch with things that hold you back and drag you down. It’s kind of life inspired, as far as lyrical content and reoccurring theme. Then, musically, just mid 2000s pop punk and emo! That’s the heart of the music, for sure. Nostalgic with a modern twist.

So in the last few years you guys have kind of blown up and you’re touring everywhere. You opened up for All Time Low at the end of last year! What’s the whole experience like now?

Well, from a small local band to touring everywhere…

Marc: It’s different but the same. The same way with the record and the re-release– I feel like our band started when we were young adults and now it’s been years since I’ve met all these guys. We’ve kind of grown up with the band and it’s just put us in weird places. I think we’re just kind of used to rolling with the punches now. We’ve meshed together to form this weird blob that kind of rolls forward and absorbs whatever it can with it! The good and the bad. It’s been interesting and I don’t know, it’s weird to see your band grow.

Evan: It’s almost like you don’t notice it either. You don’t notice the growth until… like we just had two days off to sit around and do nothing. It was amazing but I remember sitting there like, “damn, I’ve just been traveling the country for 30 days straight!” This is super weird.

What do they even have there?

Gabe: They have a blue football field, which was pretty cool.

Austin: All cities are like New York City but a lot less toned down to some degree.

Gabe: Every city is a city! Boise is smaller than Orlando! It’s expanding. There’s a lot of tech sh*t there.

I would never expect that!

Marc: We never cease to be surprised by anything.

Austin: I definitely feel like we’re stoked on it; whatever “it” is.

Alright. So how’s the Orlando music scene? People don’t really expect it to be a big thing but I’ve heard it’s big…

Austin: The Orlando music scene is the best music scene in the country! The reason I say that is because you can go out to a show in another city and there would be nobody there. If you go to a show in Orlando, there’s at least 20 people there every single time and I’ve never seen that in any other city.

Gabe: This tour showed me a lot. I used to think that Orlando sucked and then I went to multiple cities and towns in the country and I was like, “holy f**k, Orlando’s way better than this!”

Evan: I would say Chicago, Orlando, and New York are the three major cities for DIY scenes.

Band: On the east coast!

Marc: It’s a good place to grow your band because there’s a lot of people doing things at a lot of different levels. For example, we’re friends with a band called Capstan and we’ve watched them go from hosting bands in their house for house shows to now they’re touring the country heavy. But then there’s a bunch of DIY bands that would have opened a show and we’ll go out and support them. Then there’s bands like A Day To Remember who frequent a bunch of local businesses. It’s a good melting pot of everybody on a bunch of different levels. It’s very easy to help people out and exchange ideas and get different perspectives.

Evan: People don’t really think about it but Florida’s put out a lot! It’s kind of something I came to terms with on this tour.

Marc: It’s because nobody likes it there!

Evan: It’s like everyone wants to get out so bad that they just start this thing and go and get successful.

So the re-release is almost here and the tour ends this week...

So what are you up to after all of this?

Marc: More touring, for sure. Nothing that we can announce yet but there’s stuff in the works! We just teamed up with Artery Global, so we’re going to be doing a lot of touring through the end of the year. We’re working towards writing a full-length right now. I have no idea when that’s going to come out but at some point, it has to! I don’t know… just trying to get our music in as many ears as possible; whether it’s through social media or touring. A lot of hustling, bumping and grinding.

Austin: We’re still trying to learn the game and figure it all out. I feel like by the end of 2018 we’ll really have a grasp on it.

Marc: And then we’ll reach the next level of bandom and we’ll be like, “what do we do now?!”

Austin: I don’t know if we know where we are right now. I think we’ll have a few more tours to do and then we’ll have a grasp on what to do next.

Evan: Just expect to be annoyed by the name Hungover. Hopefully not annoyed but…

Marc: There’s a quote from Mike Birbiglia that’s like, “when you reach a certain level of success, you expect someone to open a trap door and be like, ‘ok! you’re in the club now! this is what you do!’ but that doesn’t exist.” So I think over the next year, we’ll be figuring a lot of shit out.

Gabe: This year is definitely for the growth of Hungover.

Anything else you guys wanna add?

Marc: WILT comes out March 30th. We’ll be touring a lot in the summer through the rest of the year. Please buy our record so that we could live!

Austin: Don’t forget to love each other. Super important!

Stream WILT on Spotify, or you can buy it here!