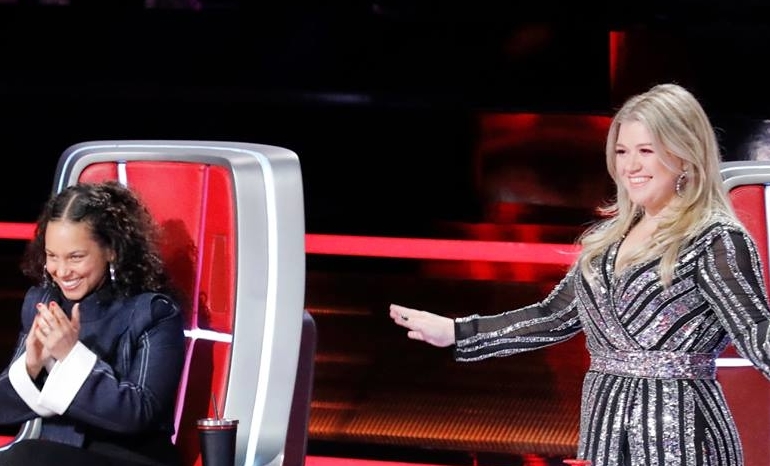 The season 14 knockout rounds on NBC’s The Voice premiered earlier this week, with standout performances by many of the artists.

Helping with the coaching process during this season’s Knockouts are four distinguished winners of the popular singing competition. Joining forces with Adam Levine is Jordan Smith, winner of Season 9 and the highest grossing Voice artist of all time. Blake Shelton is teamed up with his most recent champion Chloe Kohanski. Cassadee Pope, Season 3 winner, is aiding Team Kelly Clarkson, and Alicia Keys enlisted the help from her only winner, Chris Blue.

For those of you who are unfamiliar with how the knockout rounds work, the coaches pair two of their artists together and each artist performs their own individual song. The coach then selects a winner. Each coach gets one steal in these rounds, where they can take a losing artist from another coach’s team. New to this season is the SAVE option, where a coach can save one artist on their team from going home.

To celebrate the season 14 knockout premiere, here are our favorite pairings from this week:

Brynn Cartelli is just 14 years old making her the youngest in the competition, but her voice may be one of the best this season. Her emotional rendition of “Here Comes Goodbye” by Rascal Flatts left all four judges in awe. Jamella sang Little Big Town‘s “Girl Crush,” also impressing the judges with her unique inflections.

Drew Cole put his unique folk-rock spin that landed him a spot on Team Adam in the first place on Niall Horan‘s “Slow Hands,” while Jackie Verna presented her rendition of Lady Antebellum‘s “American Honey.”

Jackie may have won the knockout, but Drew wasn’t even close to going home- Coach Adam used his only save on him and Blake used his only steal. In the end, Drew proved his loyalty and remained on Team Adam.

Voice-favorite since his unique take on “My Girl” during the Blind Auditions, Terrence Cunningham wowed the judges with his take on Rufus and Chaka Khan‘s “Tell Me Something Good.” Another coach-favorite, Christiana Danielle put her spin on Sia‘s “Elastic Heart.”

Terrence won the Knockout, but Christiana was saved by Alicia and stolen by Kelly and Adam. Alicia’s only save went to good use and Christiana chose to remain on Team Alicia.

Adam stole Jackie Foster from Team Kelly during the Battle Rounds and she did not disappoint during the Knockouts with her take on Evanescence‘s “Bring Me to Life.” Mia Boostrom took a more soulful approach with Eva Cassidy‘s “Wade in the Water.”

Mia won the round, but Adam tried to steal Jackie before he used his only steal on Drew and the other 3 judges all hit their steal button for her. Jackie found her new home on Team Alicia.

Of all the pairings this week, this one may have made the least sense– Jaclyn Lovely approached Corinne Bailey Rae‘s “Put Your Records On” delicately with her airy vocals and Kyle Jade produced a powerful rendition of Lesley Gore‘s “You Don’t Own Me.”

In the end, Blake went with Kyle and Jaclyn was sent home.