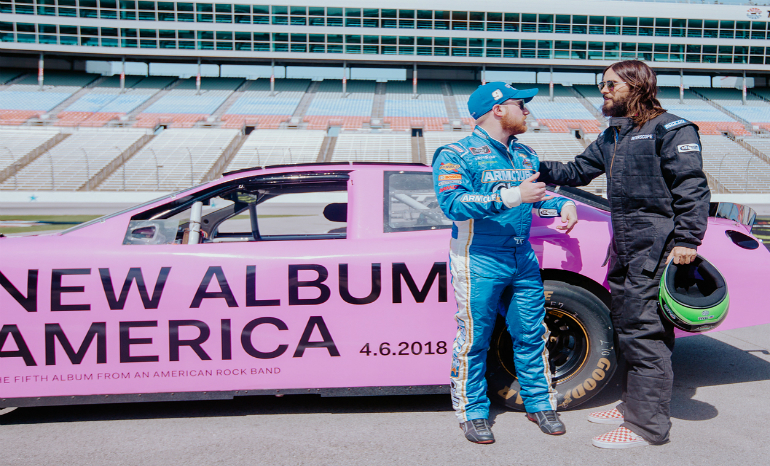 Good news, everyone! Thirty Seconds to Mars is back with their latest album, AMERICA, which is their fifth LP to date. Not gonna lie… we were super excited to hear this one, but going in we already knew that this would be the bands most pop-centric record yet. Still, I was surprised to hear how it turned out.

IT'S FINALLY HERE!!! Own our brand new album #AMERICA, now available worldwide! 🎉 Already listening? Comment below with your favorite song! 👇🏻👇🏻👇🏻

Overall, the album is decent for a band that continues to try and bridge the gap between old and new. There are some tracks on the album that we can’t stop listening to, while others don’t seem to have the same effect. The biggest issue with the album, in our opinion, is the repeated use and abuse of auto-tune on Jared Leto’s vocals, often cutting off some of the words at odd moments. This is most noticeable on “Dangerous Night” and “One Track Mind.” We also noticed that many of the tracks are very repetitive. Whether it be the additional electronic elements on the lyrics, it was exhausting to hear what felt like the same thing over and over again.

For a band that has had many lives, we continue to applaud them for always changing up their sound without fear. As a band or artist, making those sorts of changes can be scary because if fans don’t like what you’ve done, they will revolt. Simultaneously, critics will react and sales can plummet, which obviously, no artist wants. At the same time, though, an artist needs to have a sense of artistic freedom and expression, and Thirty Seconds to Mars has always managed to maintain that.

Another observation we made from this LP is that many of the guest features on the record work surprisingly well… especially the one with Halsey on “Love Is Madness.” Thirty Seconds to Mars’ aesthetic on AMERICA oddly fits in quite well with Halsey and hers, which leads us back to the fact that many of the songs may be repetitive, but at the same time are commercially perfect pop songs… some of which I may or may not have on repeat.

To be completely honest, anyone that’s been a longtime fan of the band may be disappointed in this new album. The lyrical content doesn’t hold up, especially to such albums as A Beautiful Lie or This Is War. Guitar, heartfelt lyrics, and Jared Leto’s edgy, but beautiful vocals are what the band has been known for since their start, but these elements are all scarce on this album, which may make it a tough listen for devoted fans.