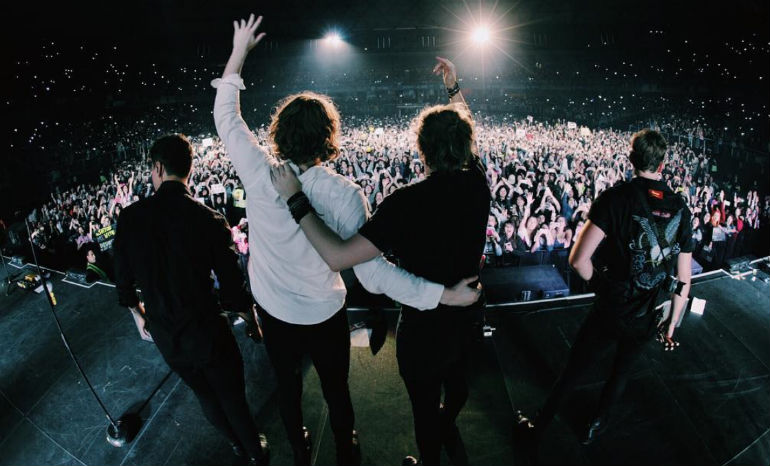 Going back to their roots, 5 Seconds of Summer are now playing super intimate shows for their sold out promo tour, 5SOS3. Switching from stadium tours to venues fitting as few as 800 people, it’s safe to say the place was packed.

As many of you already know, general admission shows can be a little crazy (and by a little, we mean a lot), but being able to see the band so up-close and personal was definitely worth it, even while getting bounced around a bit in the crowd. Since their new single “Youngblood” was just released last week, this setlist was a mix of old fan favorites, combined with four new songs off their upcoming album Youngblood, including the song itself.

Although it was a short show, the band interacted with fans and everyone appeared to have a great time. The band members seemed both comfortable and in their element onstage, and while all of the band members hyped of the crowd, Luke Hemmings had a noticeably amazing stage presence. Michael Clifford rocked out on the guitar, and as always, showcased some great vocals and riffs. His solo in “Jet Black Heart” was amazing, as usual.

Even though drummer’s often get overlooked and/or overshadowed, Ashton Irwin still continues to find ways to interact with fans in the crowd. He even stood up on his drum set to hype up the audience! In a change of events, bass player Calum Hood is also now on keys and played the two instruments during the set as if he’d been playing it live for years. So impressive!

Changing up some from their pop punk shows of the past, the infamous “She Looks So Perfect” jump was taken out and was replaced with glitter and new vibes.

// Glitter // We wear glitter a lot, it empowers the character’s we portray onstage, it represents a softness, and is a powerful addition to confidence. It feels like an extension of expression.

Fans were able to hear the new tracks, “Youngblood,” “Lie To Me,” “Talk Fast,” “Moving Along” and “Valentine” as a taste of what’s to come with their new album, Youngblood, which will be released on June 22nd. If you missed this round of shows, 5SOS is coming back through the U.S. on the Meet You There Tour, which is set to launch in Connecticut on August 29th.

MEET YOU THERE TOUR // EAST COAST DATES ON SALE NOW // ALL OTHER NORTH AMERICAN DATES 10AM LOCAL https://5sosuk.lnk.to/5SOSTIXIN