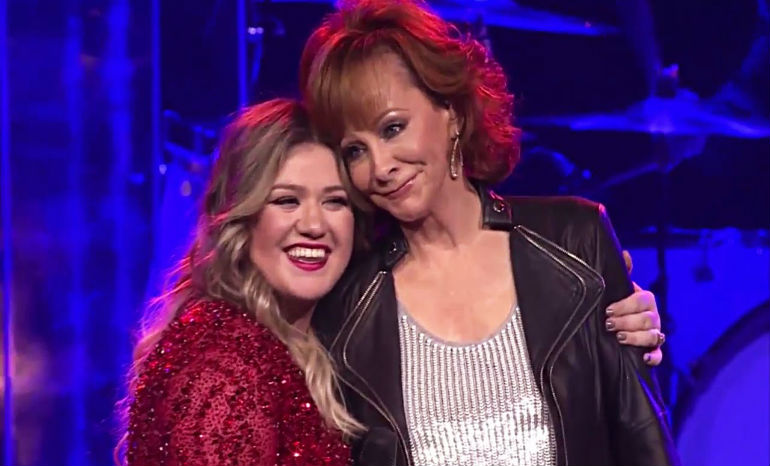 Imagine being friends with your childhood idol, and then also imagine they’re your mother-in-law. Well, believe it or not, that’s the case for Kelly Clarkson! Her and Reba McEntire have a storied history dating back to 2002, whether it’s been performing together or becoming a part of each other’s families.

In honor of their duet of McEntire’s song “Does He Love You” at this year’s ACM Awards, here’s a timeline of their relationship!

2002: Three weeks after Clarkson was crowned as the first winner, American Idol aired a Las Vegas special. Clarkson had stated during the show that she was a big fan of McEntire’s and during the special, they performed “Does He Love You.” The cutest part? Clarkson introduced McEntire as her “American Idol.”

2003: Clarkson covered McEntire’s song “Why Haven’t I Heard From You” on tour.

2006: CMT aired a special called CMT: Giants which honored McEntire’s career. Clarkson performed a duet of “Does He Love You” with Martina McBride, as well as a solo performance of “Why Haven’t I Heard From You.”

2007: The two performed a concert for CMT’s show Crossroads at the Ryman Auditorium in Nashville, TN. They performed each other’s songs and even debuted a song they wrote together called “A Lot Like You” (which unfortunately didn’t make it into the episode when it aired).

2007: McEntire loved Clarkson’s 2005 hit song “Because Of You” so much that she wanted to record it. Her and Clarkson recorded a country version which was released as a single from McEntire’s album Reba: Duets in September 2007. They performed it live on Oprah, the ACM Awards, and CMA Fest.

2008: Clarkson and McEntire loved performing together so much that in 2008, they went on tour together! The 2 Worlds 2 Voices tour took place in two legs across the United States and Canada and like on Crossroads, they duetted on each other’s songs.

2014: Clarkson and Miranda Lambert performed a medley of some of McEntire’s biggest hits at the American Country Countdown Awards. They sang “How Blue” and “Take It Back” before Reba joined in during “Fancy.”

2017: Clarkson, McEntire, and Yearwood sang again on “Softly and Tenderly” for McEntire’s Sing It Now: Songs of Faith & Hope album.

2018: This past Sunday at the ACM Awards, the two performed “Does He Love You” which was released 25 years ago.

Did you get all of that?! Basically, Kelly Clarkson is living proof that your fangirl dreams can come true!