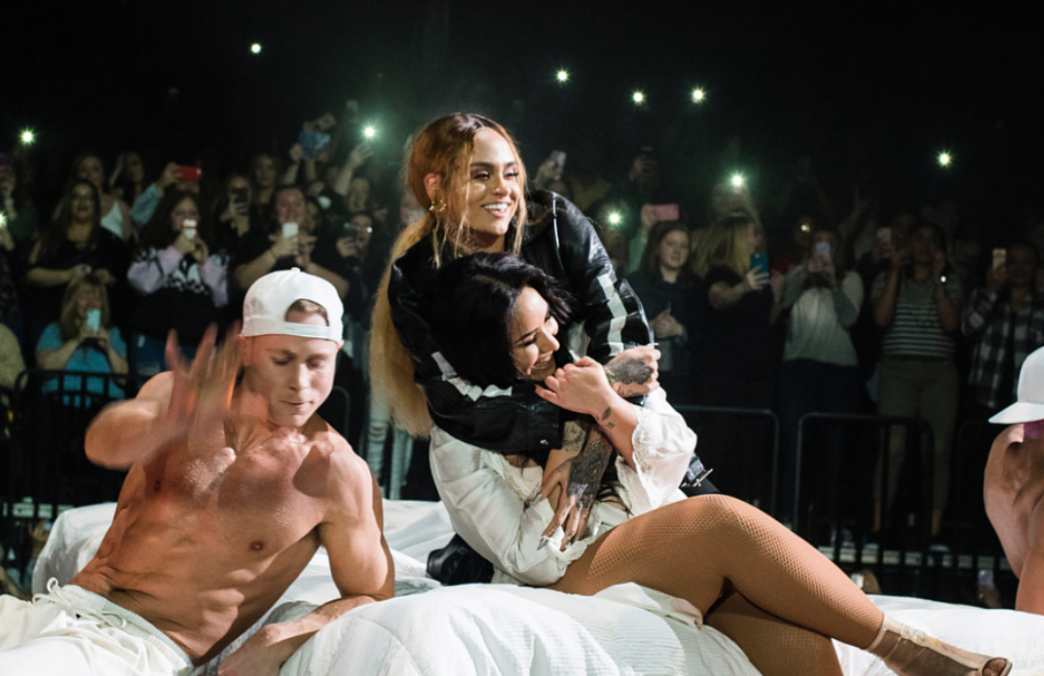 There have been plenty of jaw-dropping moments in pop culture history. From Kanye West’s infamous tirade at the 2009 VMA’s, to Lady Gaga’s meat dress of the 2010 VMA’s, our favorite celebs never fail to disappoint.  But what’s better than strange looks and unwelcomed speeches? The often unexpected celebrity kisses that leave us #shook. Here are 5 celebrity kisses that wowed audiences and fans across the nation:

While this is the most recent kiss to make the list, we’ll be talking about this one for years to come.  At the closing date of Demi Lovato’s Tell Me You Love Me tour, Kehlani joined the pop star mid-set, only to share a steamy kiss with Demi that left the audience just as surprised as the star. The pair’s onstage chemistry is undeniable, with rumors flying that Demi gave a subtle nod to Kehlani during her “Cool For the Summer” performance, while Kehlani dedicated her performance of “Honey” to Lovato.

Easily the single most iconic celebrity moment of all time, the Britney Spears, Madonna, and Christina Aguilera kiss from the 2003 VMA’s is still talked about to this day. The trio shared a kiss on air during their mash-up performance of Madonna’s songs “Like a Virgin” and “Hollywood”. The best part? Britney and Christina rocking white wedding dresses, with Madonna as their groom, dressed in an all black tux. This is one celebrity kiss that is sure to go down in pop-culture history.

Miley Cyrus’s Bangerz era was pretty notorious. From her 2013 VMA performance with Robin Thicke, to her now-iconic “Wrecking Ball” performance at the AMA’s, she became infamous for her live stunts and wow-factor.  When the Bangerz tour came to the Staples Center, it was no exception.  During her performance of “Adore You,” Miley found Katy Perry in the crowd, only to kiss her in front of 20,000 people. After the show, Miley tweeted, “I just kissed a girl and I really liked it a lot”, but we’re not too sure if Katy felt the same way.

Okay, so this doesn’t exactly pertain to music, but we just couldn’t make a kiss list without including this one. Winner of MTV Movie Awards’ “Best Kiss” in 2005, Rachel McAdams and Ryan Gosling took the stage in true Ally and Noah fashion, passionately reenacting one of the best kisses in movie history. Can you name a more iconic duo? Didn’t think so.

Halsey and G-Eazy can be seen getting handsy almost every time they perform together. The pair sparked dating rumours last August, and have given us plenty of on-stage kisses since. Watch the duo perform “Him & I” on Jimmy Kimmel and we can guarantee you’ll be saying #goals by the end of it.