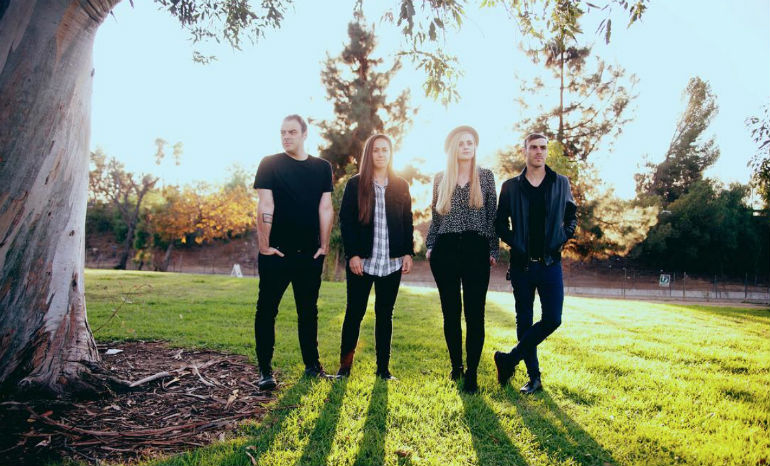 If you haven’t heard of the up and coming indie band Sleeplust, here’s your chance to get to know them! We had the opportunity to chat with the quartet, Joe, Mike, Amber and Sarah, all about their new singles, “Burning,” and “Sedona,” off of their upcoming EP, as well as their music evolution as a band over the past couple of years. Check out our interview HERE:
You just released your new singles, “Burning” and “Sedona.” Tell us a little bit about the songs and what they mean to you.

Joe: The new single “Burning”, as well as our newest single “Sedona” that just came out, both signify a new chapter for the band I feel like. We’ve really explored our sound and honed in on who we are even more throughout this writing process.

You’ve been an unsigned band for the past year and a half, but now, you’ve landed a publishing deal with Angry Mob Music – congratulations! What does this mean for the future of Sleeplust?

Joe: Hey thanks! We’re so excited to be a part of the Angry Mob family, they’re great people to work with on a daily basis. I think for us it was the next logical step as a band, we’ve had some good luck with TV syncs and placements over the past year and Angry Mob were the right people at the right time for us!

Sarah: Thank you, great things. These are the steps we wanted to take to make this a successful career in life. Looking forward to what’s next!

You have an EP on the way for which “Burning” serves as the lead single. Can you give us an inside scoop on what we can expect from it?

Mike: I think the new EP is going to truly be a perfected version of Sleeplust. We’ve been working SO hard on this group of songs for a while now I truly feel like this set of songs are gong to set the bar for Sleeplust and what our audience can expect from us going forward. Incredibly excited.

Joe: On this new EP I feel like we’ve really found our true identity as a band. We have some of the biggest sounding songs we’ve ever written along with some of the most personal. It’s a broad spectrum we tried to cover.

How does your upcoming EP differ from last year’s Missing Pieces EP?

Amber: I’ve always worn my heart on my sleeve and have had music as a shoulder to cry on. There’s no better way to purge what I’m feeling than to put it in a song and hopefully connect with someone else who may be experiencing the same thing. Those songs are a reflection of coming to terms with being a human and just embracing all of it, even the not so glamorous parts. We started the writing process for each song with bare bones and built them from the ground up. If a song can make you feel something when it’s stripped down, you’re on the right track.

Joe: Continuing from the last question I think the last EP we’re all super proud of. Those were songs we were writing while figuring out what the live show was and what this band was all about. One of the last songs we wrote for that EP was “Flood Gates” and that’s when we felt like we really hit upon something that felt uniquely us.

If you had to describe your band and its genre of music to someone who hadn’t heard of you, how would you describe yourselves?

Mike: That’s always tough but something like…Indie/Pop Rock with a Shoe gaze tone and electronics.

Sarah: Normally I say electronic indie with a groovy beat.

What are some of your favorite hobbies or things that you enjoy doing outside of the band?

Joe: As far as things outside of the band, I produce and write for an array of artists and just love collaborating and being in the creative environment writing songs with people. As far as hobbies go I enjoy tasting all of the delicious foods our city of LA has to offer and also I’m a big runner… probably to offset the previous hobby!

Mike: I love to cook! I really really take great pride in making my Italian sauce haha. I also love poetry, outdoor activities and videogames. I also really like going to the movie theatre cause it’s nice shut off time.

Amber: LA has so many great hikes, I love to explore those. Oh and always finding tacos.

Sarah: I grew up playing sports. I love to workout and I am into fashion as well.

Who came up with the name for the band “Sleeplust” and what was it inspired by?

Joe: Our name comes from a Jack Kerouac quote from his book “On The Road.”

Who are some artists that you look up to or who inspire your music?

Sarah: I grew up listening to punk, pop, hip hop 90’s music. Blink 182, Travis Barker is my inspiration for drumming as well as the bands Yellowcard, Paramore, and hip hop artists.

Joe: I could go on and on while answering this question. But Jack Antonoff and his band, Bleachers are a huge influence on me. Butch Walker, in my opinion, is one of the best songwriters of our generation. Metric is a big influence on me, so are bands like The Cure and Blink-182. I’m a really big hip hop/R&B fan which inspires me a lot. Artists such as Kanye West, Chance the Rapper, SZA, Post Malone, just to name a few.

Joe: The next few shows we have coming up are in or around the LA area. April 7th at The Lost Knight and May 14th at The Satellite. We’re working on June and Summer dates as we speak!

Joe: Mostly just thank you for the support, we’ve been fortunate enough that people seem to really like what we’ve been creating together and that makes us immensely happy and proud. At the end of the day we’re honestly 4 people who just love making art together.