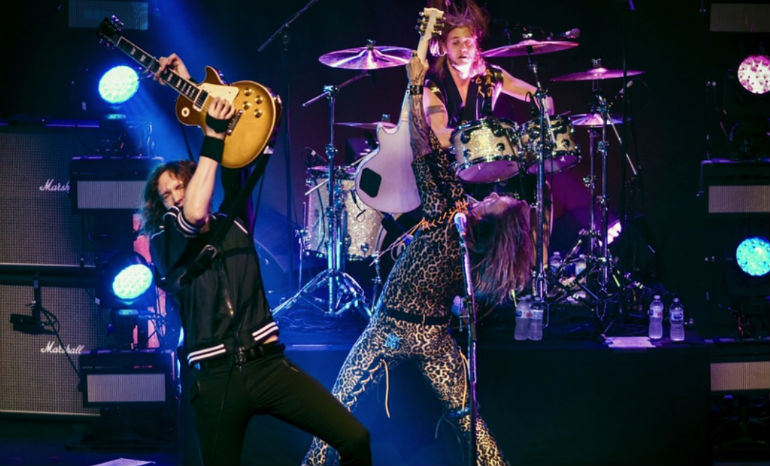 I just got to spend my Friday night with The Darkness! The British rock band, consisting of lead singer/guitarist Justin Hawkins, his brother Dan Hawkins on guitar, Frankie Poullain on bass, and Rufus Tiger Taylor on drums, played a 2 hour energizing set at Williamsburg’s Brooklyn Steel on April 20th. The Lowestoft, UK-based band has grown quite the following over their eighteen year career and I can see why…they put on a damn good show.

They opened their set with the song “Open Fire” and when they sang the line “So I embrace the darkness / ‘Cause it’s always there” the crowd went wild (I mean it’s pretty awesome to include your band’s name in your own lyrics!) Then Justin introduced the band as “The motherf***ing Darkness” and the audience exploded with applause. The night was only just beginning…

Throughout the night, The Darkness played songs from each of their five albums including their biggest hit “I Believe In A Thing Called Love” which made it to #9 on the US Billboard Alternative chart in 2004.

If The Darkness had been around in the 70s and 80s, I could definitely see them playing arenas with their glam rock/hair band sound. Playing in a former steel manufacturing plant didn’t seem to bother Justin though. He said he loved Brooklyn Steel and would rather play a residency there every year than play Madison Square Garden. He loves Brooklyn Steel so much he said “the space has been engineered for this type of show. The walls make us sound f***ing amazing. [Brooklyn Steel] should be a heritage site. Remember The Darkness here in 2018!”

Aside from the music, it was apparent that fans are also attracted to The Darkness because they interact with the audience a ton! The most memorable moments were surrounding the song “Friday Night.” When introducing the song, Justin asked to borrow glasses, a hat, and a black glove from fans and once he put on  this new outfit, asked the crowd, “Do I look like a short sighted Freddy Kruger?” Fans also passed a Darth Vader mask up to the stage for Taylor to wear during the song. Before the full band started playing “Friday Night,” Justin had the entire audience participate in an a cappella sing-a-long. When one fan in the front wasn’t singing, Justin called him out and made him sing by himself.

During the final song of the night which was “Love On The Rocks With No Ice,” Justin sat on the shoulders of a security guard and performed in the middle of the crowd. This type of interaction is something that audiences never forget. It’s rare when celebrities interact with the audience so closely and I found The Darkness’ dedication to their fans to be so genuine.

There was so much energy from the band which truly made the audience want to go “dancing on a Friday Night.” The crowd loved the show; I have never seen so many grown men singing in falsetto while head banging and fist pumping. Whether or not you enjoy this type of music, The Darkness have this infectious thing about them that will turn anyone who leaves their show into a fan.