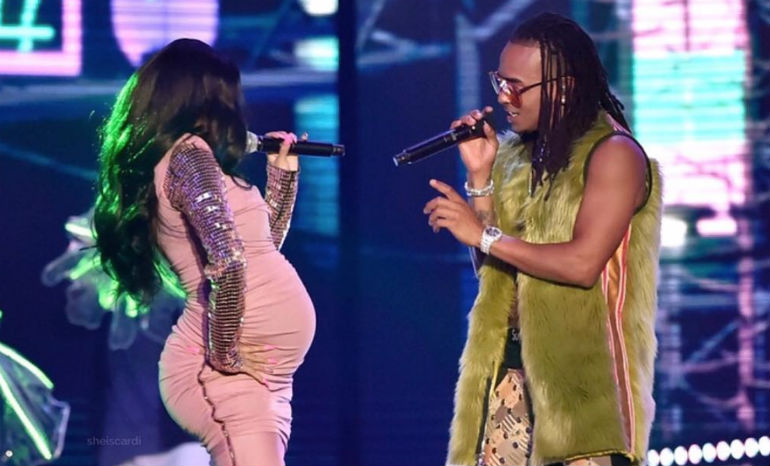 Oh, baby! It may have never crossed your mind, but actually, lots of female musicians have no choice but to postpone or cancel shows due to pregnancy. Obviously, at some point during a pregnancy, you have to stop working… especially when your job is to dance and sing on stage in front of thousands of people. So, which musicians had to cancel shows because they were just too pregnant to perform? Take a look:

During her SNL performance last month, Cardi B debuted her baby bump to the world! The rapper is expecting her first child with her fiancé, hip-hop artist Offset (of the group Migos).

Three weeks later, Cardi posted a video on Instagram letting fans know that after her upcoming show at Broccoli Fest in Washington D.C., she would be canceling her upcoming spring shows. She joked, “I be looking like I be moving and everything but in reality, a b*tch barely can breathe!” Cardi will be resuming her shows in the fall when she opens up for Bruno Mars.

In February 2017, Beyoncé announced that she was pregnant with twins. She did this by posting a picture of her pregnancy photoshoot on Instagram.

At the time, Beyoncé was scheduled to headline two weekends at Coachella that upcoming April. However, three weeks after her pregnancy announcement, her team announced a statement saying that she’d have to cancel her performance “following the advice of her doctors to keep a less rigorous schedule in the coming months.” Lucky for fans, she rescheduled and headlined two weekends at this year’s festival just last month!

During the Los Angeles stop on her 2015 Piece By Piece tour, Kelly impulsively announced that she was pregnant with her second child.

A few weeks later she announced on social media that she was canceling her six remaining US dates and her Canadian and UK tours due to vocal rest.

This does tie in with her pregnancy, though. Ever since she gave birth to her first child in 2014, she’s suffered vocal damage and wasn’t sure she’d ever recover. She told Entertainment Tonight, “I literally had a moment where I cried and drank wine all day. I was like, ‘Oh, God, I’m not going to be a singer anymore!’ I was bawling to my husband and like, completely hammered, just going, ‘Oh my God, it’s over. I don’t know what I’m going to do.” While she never rescheduled those cancelled dates, her voice came back stronger than ever!

In August 2017, Lady Antebellum revealed that Scott and fellow band member Dave Haywood were both expecting their second children.

A day later Scott announced she was having twins!

Unfortunately, in September the group had to cancel their South African performances. It would’ve been the group’s first time performing there. To date, they have yet to reschedule.

In October 2015, Janet Jackson had to reschedule her Unbreakable Tour so that she could go on vocal rest. After multiple postponements over the next few months, she published a video in April 2016 stating, “my husband and I are planning our family. So I’m gonna have to delay the tour. Please if you can try and understand that it’s important that I do this now. I have to rest up, doctor’s orders.”

In October 2016, she confirmed her pregnancy. And in September 2017, Janet launched her new State of the World tour which is continuing on now.