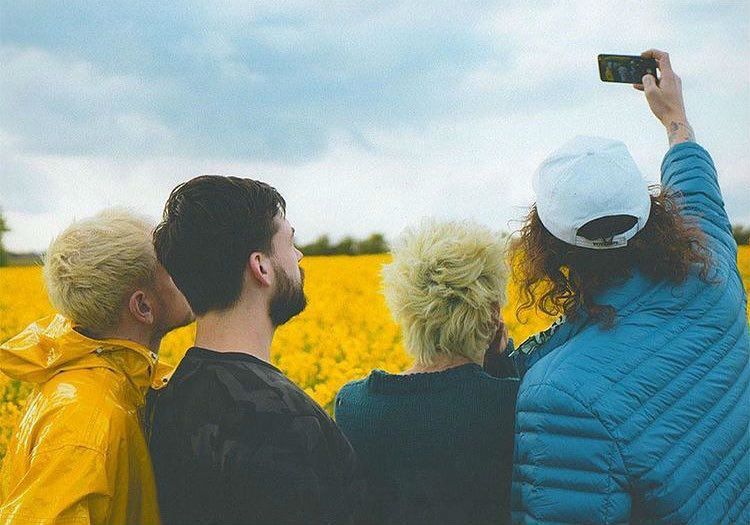 PSA to all The 1975 fanatics: hold onto your wigs because the third and final album is well on its way!

After two years since The 1975 released their second album I Like It When You Sleep For You Are So Beautiful Yet So Unaware Of It, the boys have been touring all over and have been playing festivals all around the world. However, in more recent months, the band has remained off the grid.

During this dry period where no new music has been released, we can’t help but wonder what exactly the band has been up to. For starters, frontman Matty Healy has spontaneously changed his hair color from brown to a neon colored buzz. We aren’t exactly sure what that means, but honestly, this type of change is kind of typical. For every new album, the band makes an obvious change in their aesthetic, and what better way to make a statement than starting with Healy’s hair? Plus, fans are obsessed with it!

Here are some of Healy’s more recent looks…

In regards to the more important stuff, we can be certain that the new album Music For Cars will drop on June 1st, 2018. After countless Twitter hints from Healy, the band finally pulled their big publicity stunt on May 1st when they posted new promotional photos on their socials prompting fans to visit their official website. On their reconstructed website, you’ll find a clock that counts down to June 1st. Would you look at that!

Looking into the band’s official Instagram page, it’s no secret that the new theme of Music For Cars will be centered around how technology is shifting our values within our postmodern world. This is a major transition from the band’s floral, baby pink aesthetic of their previous album. The last time we heard from The 1975 on Instagram was July 14th, 2017. This marked the day the era of I Like It When You Sleep For You Are So Beautiful Yet So Unaware Of It ended, because that’s when the band played their last show with that set list. To honor the old album in remembrance, the band posted this abrupt video on Instagram that nobody was ready for.

Since that emotional ode to their past work, they’ve begun posting their new promotional images. These images feature people overly consumed by technology, with brief captions that read:

“First, disobey; then look at your phones”

“If I don’t get to see the beauty by the end of culture, then at least I’ve seen the culture of the end of beauty”

All of these statements are blindly dragging the fan-base into some major foreshadowing. To make the situation even more cryptic, the band temporarily deleted their socials (drummer George Daniel actually deleted all of his previous posts on Instagram @bedforddanes75)! Nevertheless, this is familiar trend to longtime fans who remember the band’s dramatic social media disappearance back in June of 2015. It seems that every time the band is ready to switch up their overarching theme, fans have to aimlessly follow along and have faith in their newer projects.

The band has referred to Music For Cars as the final installment in a trilogy of their albums. Healy spilled the tea in an interview with NME when he shared that “our first three albums are the story of a person; it’s always kind of been my story. It spanned adolescence to maturity, success and trying to mediate the two, and the third one is where we are now.”

From a fangirl’s perspective, it’s actually difficult to comprehend how they’re going to top their last two albums, which were both absolutely phenomenal. Not to leave you on the edge of your seat, but Healy also mentioned to NME that album three “has to be the best thing we’ve ever done.”

… Are you shook yet?