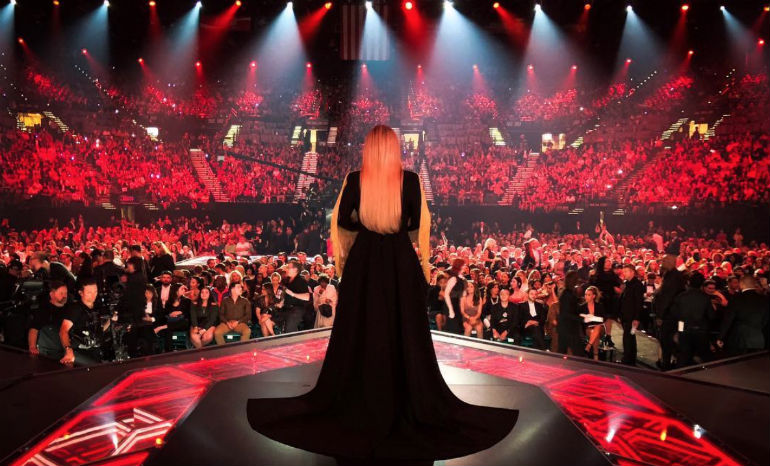 If you’re anything like us, chances are you were tuned in to the Billboard Music Awards on Sunday night watching all of your favorite musicians perform and accept awards for the incredible work they’ve done over the past year. This year’s show was full of talent, incredible collaborations, and a bunch of tear-jerking moments, too. Here are some of the highlights:

1. Kelly Clarkson opened the show with a powerful message about guns and safety.

Rather than calling for a moment of silence for the 10 lives lost in last week’s school shooting at Santa Fe High School, Kelly demanded more. Saying that she’s sick and tired of having to do these moments of silence, she instead requested we do a moment of action, where we truly do something to try and make a difference.

2. Shawn Mendes and Khalid bringing out the students of Marjory Stoneman Douglas High to sing “Youth”

Although Kelly tearfully addressed the recent Santa Fe shooting in her opening monologue, the issue of safety in our schools came up again when Shawn Mendes and Khalid performed their brand new collaboration, “Youth,” which is a song off of Shawn’s recently released self-titled album. In the middle of their performance, students from Marjory Stoneman Douglas High School in Parkland, Florida joined them in the background. In many ways, the youth of these students was taken away when a gunman entered their school in February and took 17 innocent lives.

If you’re a diehard fan of Taylor Swift, you know that it’s been a long while since she’s made an appearance at an awards show. Currently on her Reputation tour, many fans didn’t think she would make it to the show, but alas, she showed up looking ~gorgeous~ as ever. Aside from showing up, though, she also took home a total of two well-deserved awards. One was in the category of Top Female Artist, and the other was for Top Selling Album. Despite all of her success over the last decade, she made one thing clear: it was the fans that got her here. AMAZING!

Unless you’ve been living under a rock, you’re well aware of the #MeToo and #TimesUp movements that have spread like wildfire over the last year. That being said, Janet Jackson performed and accepted the 2018 Icon Award, but not without a few words about what these movements mean to her.

Janet said, “I believe for all our challenges, we live at a glorious moment history. It’s a moment when, at long last, women have made it clear that we will no longer be controlled, manipulated or abused. I stand with those women and with those men equally outraged who support us in heart and mind.” Say it louder for the people in back!

From the very beginning of the night, it became clear pretty quickly that many people were watching specifically to see their favorite K-pop group crush their performance. Luckily, BTS did just that. With an album that just dropped, the guys took the stage and performed their hit song “Fake Love.” Plus, Jungkook even flashed some thirsty fans his abs!