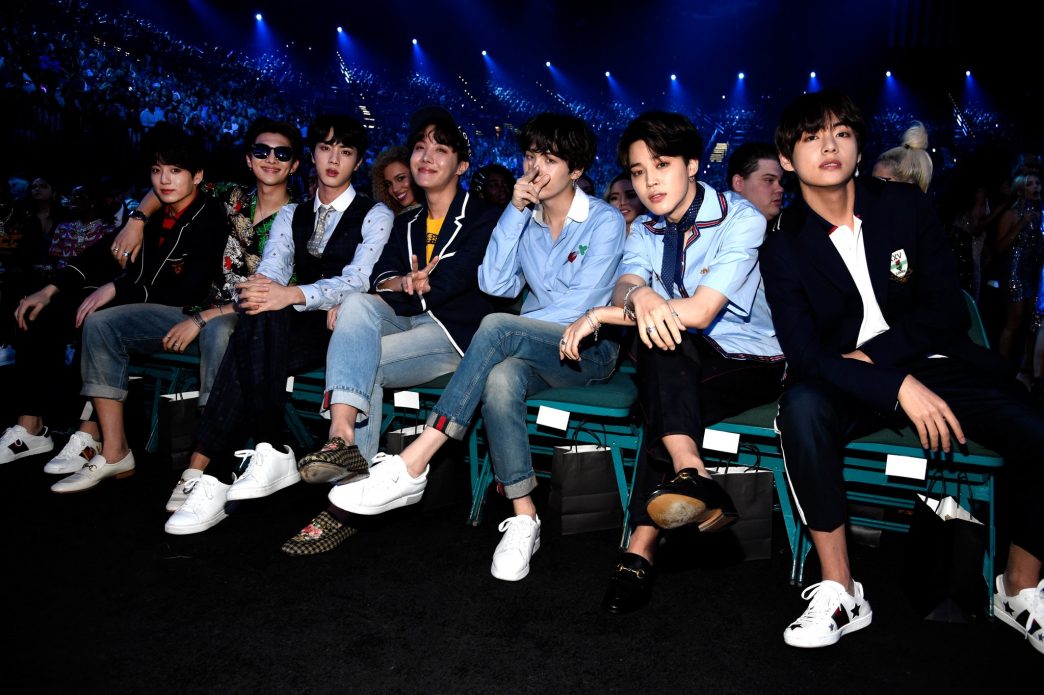 Korean band BTS dropped another album in their “Love Yourself” series with the release of LOVE YOURSELF 轉 ‘Tear’ on May 18th, which has recently become the first K-pop album to debut at number one on the Billboard 200 charts. The 11-track album contains a mix of different sounds, ranging from V’s soulful intro track “Singularity” to the rap line’s dark outro “Tear.” Although the video teaser for a future album in the series, LOVE YOURSELF 起 ‘Wonder’ featured the band members awashed in a wholesome aura, the lead single from ‘Tear’ showcases BTS heading in a darker direction for this latest album.

In contrast to their previous hit “DNA”, which perceives love through the lens of fate and destiny, “Fake Love” conveys the emotional turmoil of being hit with the realization that a relationship was not as it initially appeared. Grungier and moodier in tone, the vocals are accompanied by a strong presence of electric guitar and ominous synths. The music video, high in production value as always, features heavy use of shadows and harsh lighting, and follows a cryptic storyline that fans are no doubt dissecting and decoding.

By collaborating with both Korean and American songwriters, BTS is introducing fresh flavors fairly new to the K-pop scene with “Love Yourself ‘Tear’.” One of the standout songs on “Love Yourself ‘Tear’”  is “전하지 못한 진심 (The Truth Untold),” featuring Steve Aoki. While the Japanese-American DJ has collaborated with BTS before on a remix of their song “MIC Drop,” “The Truth Untold” is a ballad unadulterated by electronic backbeats and bass drops, highlighting the voices of the vocal line. “So What,” a upbeat track with a rebellious tone, was written by BTS’s rap line and Korean producers, but is clearly reminiscent of 2000s American dance-pop. The influences are especially noticeable with Jimin’s utterance of the phrase “we are young and wild and free,” popularized by the song from Snoop Dogg and Wiz Khalifa of the same name, and in RM’s rap “I don’t wanna die right now / I don’t wanna I don’t wanna fight right now,” which follows the same pattern as will.i.am’s part in The Black Eyed Peas’ “Rock That Body.”

The blending of cultures has been prevalent throughout the birth and evolution of different music genres but has been particularly flourishing in recent years with the increase of globalization. For example, the fusion between Latin America and Korea is evidenced by Eric Nam’s “Honestly,” whose music video was filmed in Mexico, and “Lo Siento,” a collaboration between veteran K-pop group Super Junior and Latin pop artist Leslie Grace. BTS’s latest album includes “Airplane pt.2,” a follow-up to a track from J-Hope’s mixtape earlier this year. The song was penned by “Havana” co-writer Ali Tamposi, and Latin musical elements can be heard throughout the song, from the percussion to lyrical references like “El Mariachi,” a Mexican-American film from the 1990s. As a group, BTS’s musical upbringing was heavily influenced by American hip-hop. With this new album, which includes production-heavy electronic tracks like “Love Maze” as well as the syncopated jazz melody of “134340,” it seems that the Korean band is continuing to expand their already diverse repertoire by exploring other trends in American music.

While artists who incorporate musical devices from other cultures may receive criticisms of straying from their roots, multiculturalism in the music industry shouldn’t be discounted but encouraged. Especially for K-pop, an industry founded on Western music and, in recent years, a rapidly growing global commodity, heading in this direction may be seen as just an attempt to appeal to a wider audience. But even if this were the case, as long as one’s own culture is not neglected, is the adoption of other cultural elements necessarily a negative thing? In a world where so much division exists in realms outside of the arts, the merging of cultures in music should be a welcome sight. For a band that has continually pushed the boundaries of what is considered K-pop, BTS has always remained true to themselves and what they create, and while “Love Yourself ‘Tear’” may diverge from their typical sound, it is no less authentic in its expression.