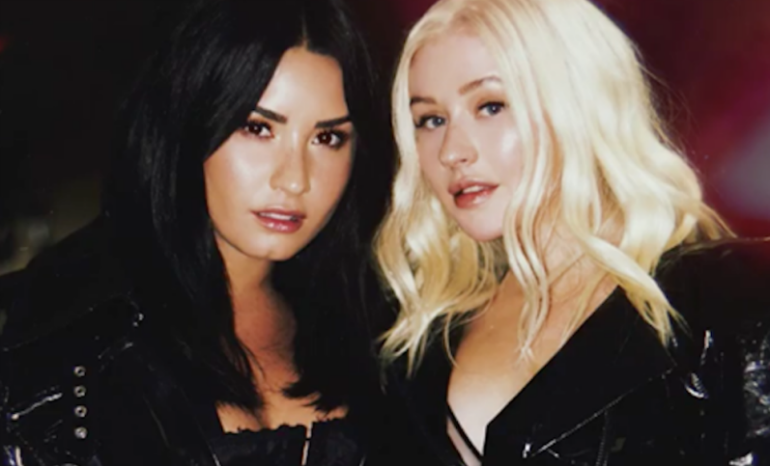 Christina Aguilera and Demi Lovato recently released an empowering female anthem called “Fall in Line.” The song serves as the second single from Aguilera’s upcoming album, Liberation, due out later this year. The song is specifically about females fighting back against societal expectations, particularly when it comes to what society expects women to do with their bodies. It fits perfectly with the current #MeToo movement against sexual assault and harassment, but Aguilera revealed that the song was recorded long before this movement began.

“I recorded this song “Fall In Line” and this was actually a few years ago before anything in the news had happened or whatever was happening with the climate of the world and it was just a song that you know needed to be heard. I’ve always because I think you know witnessed what I did growing up, I always felt really driven to have a voice that my mom kind of never had in my childhood and growing up. So I have always wanted to be that advocate for women and anybody that was kind of struggling to have their own voice. And “Fall In line” directly references to believing in yourself and believing to have a voice in its opening lines.”

Aguilera and Lovato performed the song live for the first time together at the Billboard Music Awards on May 20th. Lovato highlighted some pictures from the performance on her Instagram page and thanked Aguilera.

In the music video, Aguilera and Lovato fight back against men in armored suits who are attempting to control them. The beginning of the video opens with the two of them as babies playing in a field before two men in armored suits come and take them away. Now fully grown, Aguilera is then forced into a certain position and handed a microphone by one of the men in suits; meanwhile, two other men are watching from a control room. Ultimately, the two of them break out of the prison by killing the men and they are able to return to the field that they had played in when they were babies before they were taken.

Fan reactions have been powerful and supportive. Many believe that since both Aguilera and Lovato are former Disney stars that the video is a direct message to the control that Disney attempted to place on both of them. Fans spotted several references to Lovato’s Disney movie, Camp Rock, as pointed out in the tweet below:

The men in armored suits can also be interpreted as the media in general. The media is constantly pressuring female artists to look and act a certain way, which is what Lovato and Aguilera are fighting back against to regain control of their lives and careers.

The “Fall In Line” video is without a doubt a powerful one and a must-see, particularly for women. Check it out below and drop us a comment or a tweet (@Soundigest) and let us know what you think of it and what message you took away from it.