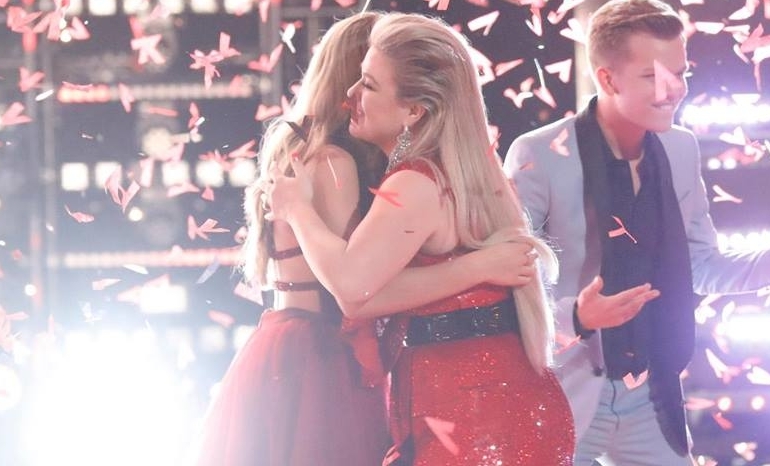 Two milestones were reached on the popular NBC singing competition, The Voice, last week when Brynn Cartelli took home the title of “The Voice.” Not only is Brynn the youngest to be both in the final four and win, but Kelly Clarkson also won her first season being a coach, making this only the third out of fourteen season to have a female coach win.

Brynn was only 14 when she auditioned, 15 when she won, and Kelly’s very first chair turn, where she even stated “I can win with you.”

Fast forward 2 months, and they did it, beating out everyone, including the other 3 finalists, Team Alicia Keys’ Britton Buchanan, and from Team Blake Shelton, Spensha Baker and Kyla Jade.

To celebrate Ms. Cartelli’s win, let’s take a look at her standout performances of Season 14:

All four coaches were shocked to find out that Brynn was only 14 when she sang Labrinth feat. Emeli Sandé‘s “Beneath Your Beautiful” during her blind audition, where she earned a two-chair turn from Kelly and Blake.

Brynn showed a grungier side to her voice when she took on teammate Dylan Hartigan with Taylor Swift‘s “…Ready For It?” The two singers were equally matched, but in the end Kelly gave the win to Brynn.

During the 14-year-old’s rendition of Rascal Flatt‘s “Here Comes Goodbye” is when the fact that she might win the whole thing became very apparent. The whole room, and even those watching at home, could feel the pain in her voice as she took on the country hit.

During the finale, Carson Daly stated that he thought this was Brynn’s break through performance. Her emotional take on the Coldplay classic, “Fix You” left the whole room silent.

From the a cappella intro, through to the end, Brynn delivered a flawless vocal during Jackie DeShannon‘s “What the World Needs Now Is Love,” securing her a place in the finale.

The Finale (Duet with Julia Michaels)

In the finale, the four finalists get to sing with a popular artist and I can’t think of a more perfect pairing than Brynn Cartelli and Julia Michaels. Their voices blended perfectly during their medley of “Issues” and “Jump.”

At 15-years-old, Brynn took on one of the biggest vocalists for her final performance. Her dramatic rendition of “Skyfall” by Adele blew away the judges and audience, and helped secure her the title of “The Voice.”

Which Brynn Cartelli performance was your favorite this season?