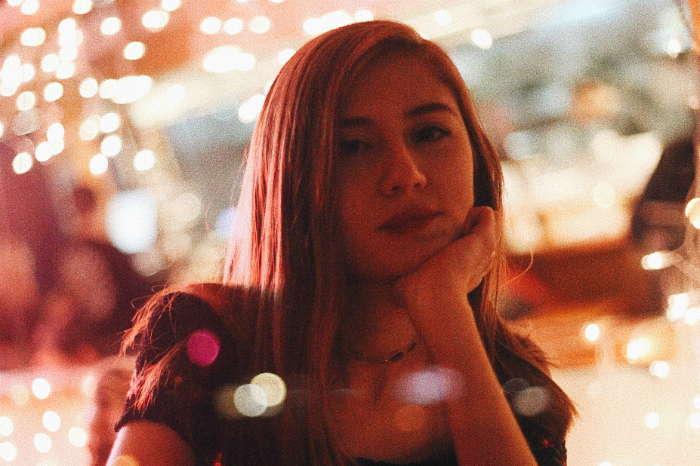 Meet NYC-based folk singer-songwriter Alex Weksler, whose beautifully honest music flashes back to the days of Carly Simon and Carole King, but with a updated pop effervescence. The Air EP was released back in October, so we spoke with Alex about how it came to be and how things have progressed for her since the release.

Let’s start off easy. Are you a Coffee or Tea person?

Coffee! I’m pretty much an addict… especially if it’s iced!

Can you tell us more about your song “Air” and how closely related the video may or may not be?

It’s very much related! I actually did write the song in a bathroom stall on bar napkins and pieced it all together when I got home. The song was written when I was out for a friend’s birthday and just really wasn’t in a good place at the time. Thankfully, no one making out actually stumbled into the bathroom, but the video totally captures the basis of the story and the headspace I was in when writing the song.

Who are some singer-songwriter’s you find inspirational?

I’m incredibly inspired by Carole King and Jewel because I grew up listening to both of them! Lately, I’m really into Sia and St. Vincent. women in music are killing it these days as a whole so it’s really cool to see.

Since human relationships are the breadth of your subject matter in your lyrics, do you prefer to write about love or heartbreak?

That’s really tough! I’d prefer to write about love because that would probably mean I’m in a better mood, but I feel like I write my best songs when I’m heartbroken or hung up on someone. That’s when I need songwriting the most and my way of coping with however I’m feeling.

What was the hardest song for you to tackle and finish on your Air EP?

“Stranger I Know,” for sure! Firstly, because it was about something I just went through so it was the most recent and I was still trying to piece together what I wanted it to sound like. Then vocally I found it the most challenging, along with trying to plan out the right arrangement to go with it. I wanted the production around it to be subtle, but still emotionally powerful, which took a while to sort out. It’s one of the songs off the EP that’s probably closest to my heart though!

Do you have any advice to give to young female guitarists and songwriters?

Just enjoy what you’re doing and be honest in your songwriting! Write about what you know and what’s affected you. It’s much more rewarding that way.

I think that’s for sure the hardest question in this interview. I would love the opportunity to collaborate with Stevie Nicks because I think her songwriting is incredible and I know my mom would totally freak out because we both really love her.

If you had to choose one lyric of yours that meant the most to you, what would you choose? And why?

It’s actually from an older song of mine called, “Ghost” and it’s “There’s a ghost in my head, but there’s love under my skin.” I’ve struggled with anxiety and for me this really sums up how I’ve grown with it and what it feels like to have anxiety. That song is probably my favorite I’ve ever written!

Thank you so much for having me! You can keep up to date on all my music news and listen to the EP in the links below. I’ll also be releasing a video for my next single “Gold” very soon!