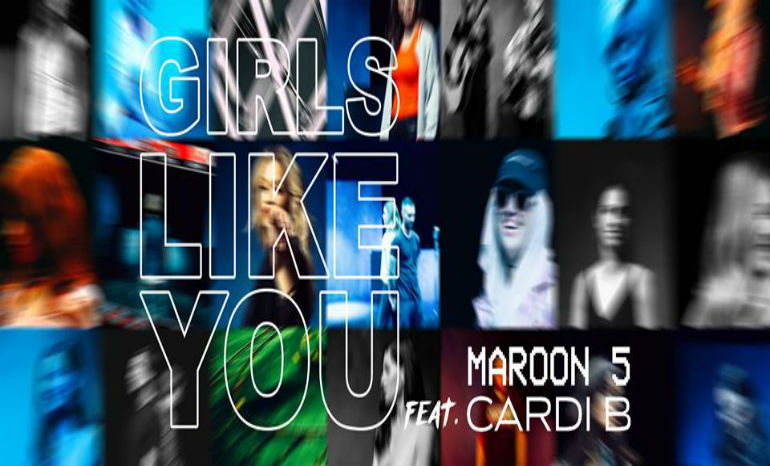 Maroon 5’s new single “Girls Like You (Remix)” drops today! The song originally was included on the band’s 2017 album Red Blue Pills, however this new track is a remix featuring rapper Cardi B.

The “Girls Like You (Remix)” video debuted last Wednesday and is star-studded! It begins with Maroon 5 performing in a simple set up but the video quickly takes a turn when the first chorus begins and singer Camila Cabello appears behind lead singer Adam Levine. Throughout the video, 25 female celebrities rotate around Levine while dancing and lip syncing along to the song.

Despite being flooded with celebrities, the music video concept and message are simple. There is no glitz and glamour or special effects that take place; it’s just a bunch of girls having fun and being happy. The message of the song reveals how important Prinsloo is to Levine, singing “What I want when I come through / I need a girl like you.” In the final scene of the music video, Levine, Prinsloo, and Dusty Rose all embrace in a hug.

Along with Levine, Cardi B co-wrote on this song. Her lyrics “Not too long ago, I was dancing for dollars / Know it’s really real if I let you meet my mama” display when she knows someone is truly important to her in a relationship.

What I love most about the “Girls Like You (Remix)” video is that it shows diversity. The celebrities included are girls of all ages, sizes, races, and careers ranging from singers, actresses, comedians, athletes, authors, and humanitarians. Although the song is written about Prinsloo, it’s a great message for all people out there who want to let someone in their life know how special and important they are.