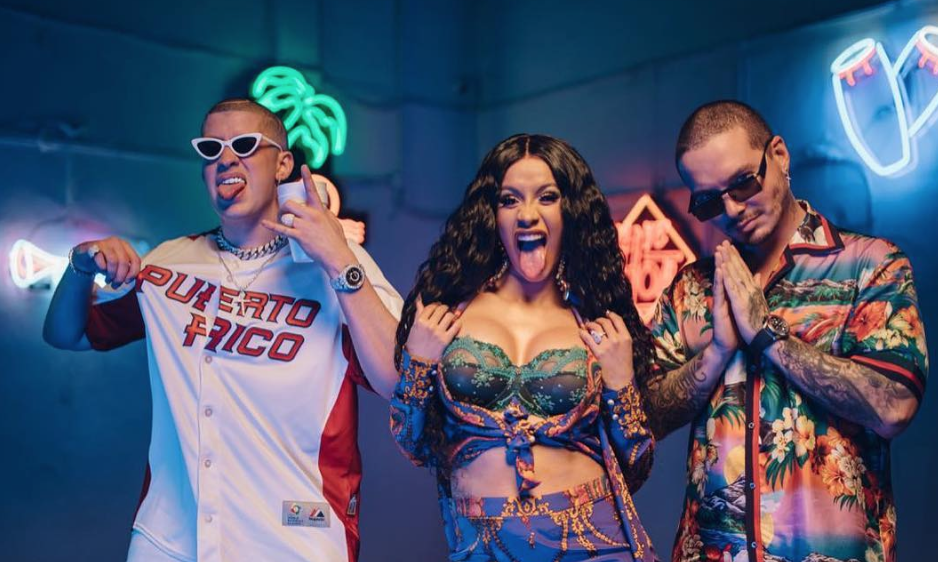 Cardi B continues to release hit after hit, and she definitely didn’t disappoint with her summer anthem “I Like It.”  Being the Dominican that she is, the song has a familiar background with it’s sample from the famous Latin song by Pete Rodriguez’s “I Like It Like That,” and features Latin artists Bad Bunny and J Balvin. The Spanglish tune has all the Spanish flare with a banging Hip-Hop beat that can be heard blasting out of cars already.

The Hip-Hop star tweeted late last month how she was emotional about the Latin superstars on the track.

J Balvin and Bad Bunny DONT know how deeply i appreciate the fact they got on my record and did the music video .Makes me emotional .Agradecida pare siempre!!

With the song topping the chart, the video is garnering just as much attention. The colorful music video is full of eye catching scenes and vibrant colors. Cardi B can be seen in clothing that some compared to Carmen Miranda as she struts down the streets of Miami.  The streets look like one huge party with couples dancing everywhere and Bad Bunny smoking hookah. With her hair wrapped in headscarves and donning a bright red dress, she definitely brought her “spiciness” in this video.

Cardi B was pregnant during the filming of the video, but her growing belly was hidden almost perfectly with her clothing, as well as the video shots used in the final cut. She even tweeted that some of the shots were filmed only a few weeks before it’s release!

On the “I like it “ music video for the for the yellow skirt and the group scene i was 5 and a half month pregnant.The red dress scene 7 month pregnant .Bro when i tell you i was so uncomfortable and hot in Miami 🤦🏽‍♀️🤦🏽‍♀️🤦🏽‍♀️omg I’ll talk about it later.

The visuals for “I Like It” were released around the same time as her video for “Be Careful,” both tracks off of her debut album, Invasion of Privacy. Cardi B has been making big “money moves,” and she was also recently featured in Jennifer Lopez’s newest video for her song “Dinero,” as well as Maroon 5’s newest track “Girls Like You.”

Watch the music video for “I Like It” below and let us know what you think in the comments or tweet us @soundigest!