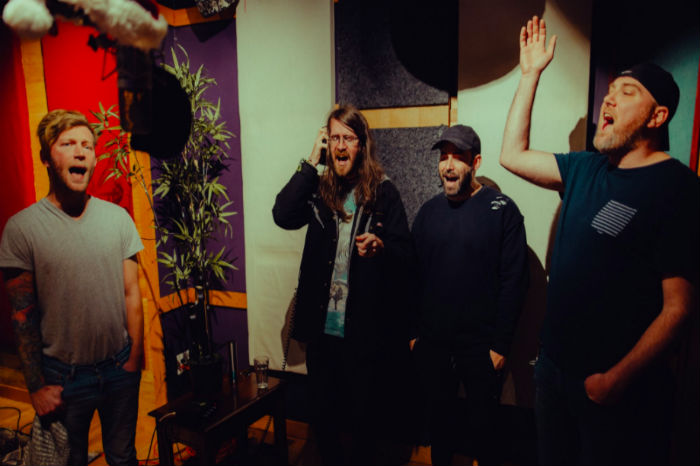 Last week Mayday Parade released the video for their latest single off their upcoming album, Sunnyland out June 15th. The single is titled simply, “It’s Hard To Be Religious When Certain People Are Never Incinerated By Bolts Of Lightning.”

The video ties into the theme portrayed on the album’s first single “Piece Of Your Heart.” It portrays cult-like themes and rebelling against them.

Frontman, Derek Sanders told Billboard.com, “The song is, I would say, a little bit more angry than most anything we’d done before, I wrote that song shortly after the 2016 presidential election, when Trump won. I was just kind of horrified something like that was even possible — not that it’s all directed towards him, necessarily, but that’s kind of the mindset I was in. It’s not all dark. There is, at least to me, a hopeful outlook towards the future and trying to appreciate what we do have. It’s not all angry.”

The video also features an LGBT+ couple sharing a kiss in all of the anti-cult chaos. “That was an afterthought, at first it was going to be just a guy and a girl, and I think Alex [Garcia, guitarist] mentioned that a girl and a girl might be something that makes it more powerful. We all agreed with that, to make that stance.”

Sunnyland is Mayday Parade’s sixth studio album and a follow up to their 2015 album Black Lines.

The band brought in many new and old producers in for the recording of Sunnyland. “Yeah, we thought it was cool but we were a little scared as well, It’s weird that we’ve never done an album like this before. At first we were worried it wouldn’t flow naturally, it would seem disjointed having these different producers be part of it. But I really think that it does feel like a cohesive album, and it was cool to try these different things. John and Howard work differently from anyone we’ve worked with before. Both of those experiences were very much outside our comfort zone, but they were also very rewarding,” Sanders said.

The band will be promoting the album by headlining the final cross-country Vans Warped Tour kicking off in Pomona, CA on June 21st.

“It’s going to be a lot of fun, but I think it’s gonna be really sad, too. It’s been such a big thing for us. We kinda got our start on the Warped Tour, so it’ll be sad to see it come to an end. But we’ll be happy to be there for it, and we have so many friends who are doing it so we know it’ll be a blast, like it always is.”