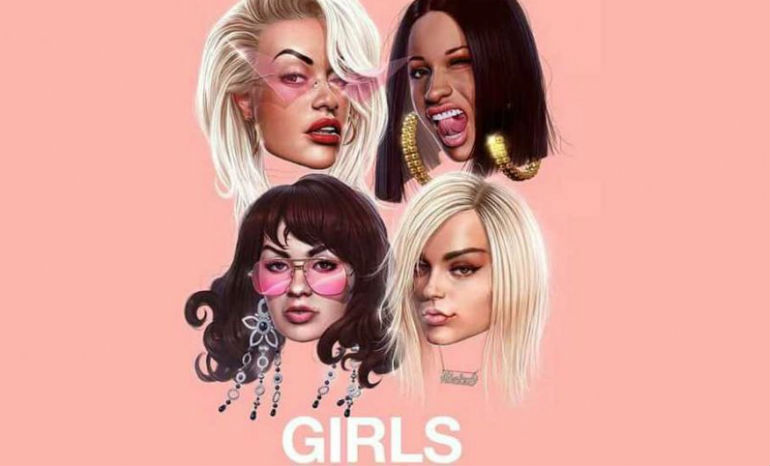 Members of the LGBT community, particularly the bisexual community, have criticized the song for tarnishing the legitimacy of female bisexuality. Much like Katy Perry‘s “I Kissed a Girl,” where Perry kisses a girl and then hopes her boyfriend won’t mind it, the song insinuates that only sometimes, girls want to kiss girls and them kissing doesn’t mean there are any serious romantic feelings in play. In “Girls,” Ora only wants to kiss girls while under the influence of alcohol (i.e. red wine).

Regardless of where you stand with the song, “Girls” is a catchy track with a sensual music video. There are no men present in the video. During Cardi B’s verse, she appears as a hologram projection that Ora watches through special glasses, but towards the end of her verse, the two share a kiss that is cinematically interesting (hologram and real human).

In the beginning of the video, Ora is surrounded by many women wearing sheer slips; she is wearing one herself as well. These women are appreciated for their faces and bodies with multiple close-ups of their faces shown. During Rexha’s verse, she is seen moving around what appears to be a funhouse mirror, where her image is displayed in multiple angles. At one point, she kisses her reflection.

The overall appreciation for women is what I took away as the main theme of the video. Regardless of the song’s controversial message, the overall theme is something that can be universally appreciated.

Check out the video below and let us know your thoughts. Tweet us (@Soundigest) or drop a comment below!