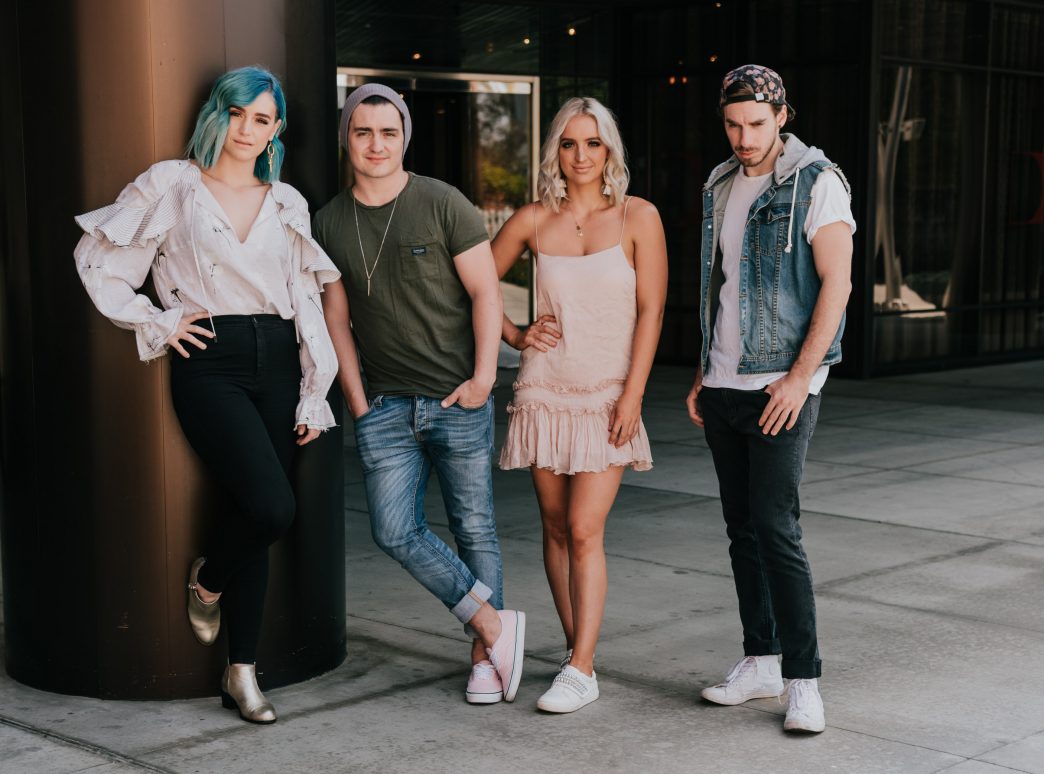 Known for their 2014 hit “Geronimo” off their debut album Bombs Away, Australian pop group Sheppard is hitting the stage again, this time with the release of their sophomore album, Watching The Sky. The album features singles “Keep Me Crazy” and “Coming Home,” which have already gone Gold and Platinum in Australia, as well as the upbeat sounds Sheppard is known for some emotionally vulnerable hits. After touring with Meghan Trainor, Justin Bieber and Little Mix, playing festivals like Austin City Limits, Rock In Rio, and Lollapalooza, and performing on Ellen, The Voice and The Tonight Show, you’ll be able to see them next this summer in New York (see below)! Here, George and Amy Sheppard and Jay Bovino open up about their new album, the rollercoaster ride of “Geronimo” and the most important thing in keeping a band together.

Did you write “Coming Home” after your wild “Geronimo” ride? What was the inspiration for that song?

G: Yeah, we certainly used that whole rollercoaster ride as inspiration. As fun as touring can be, it really is a tough thing to go through, both mentally and physically. We wanted to write a song that encapsulated that overwhelming feeling of euphoria we felt every time the plane’s wheels touched the tarmac in our home town of Brisbane.

How do you think your songwriting has progressed in Watching The Sky?

G: I think this time around we’ve really learned to use songwriting in a more clear and focused way. Bomb’s Away was a huge learning curve for us, both for writing and performing. When we were writing and recording that album we had much less of an idea of who we were as a band, who our audience was, what kind of venues we’d be playing, etc. For example, we had no way of knowing that the album would spawn an international hit and that we’d eventually end up playing to 100,000 people at Rock in Rio, Brazil. There were moments we’d be up on these massive stages thinking to ourselves, this is NOT the song for this kind of environment. This time around we’ve kept the same authentic Sheppard feel our fans love, but we’re much more prepared for the big stages. We’ve had so much experience in front of an audience now and we know so much more about what does and doesn’t work, so we’ve been able to get more intricate and detailed with a particular vibe, if that makes sense.

What was your favorite song that you wrote and never released from Stradbroke?

G: Believe it or not, we actually set ourselves a challenge and decided to write a rap song! It was called “Need to Know” and was in a similar realm to 21 Pilots’ “Stressed Out.” It was actually pretty good, but something that we’d probably never release as Sheppard.

A lot of the songs in your album identify themes of overcoming obstacles, how did overcoming the blessing/curse of “Geronimo” bring you closer as a band?

G: I think we woke up to the fact of how much better we were and how much easier life was when we actually decided to work as a team. After “Geronimo,” everyone, both in the band and on the team as a whole, seemed to have their own ideas of what made the song such a huge success and tried pulling the band in that particular direction. The tensions that caused was almost the end of us. What we didn’t realize is that what truly made “Geronimo” a success was teamwork. We all have our strengths and weaknesses in this band, and we had to come to the realization that the album wouldn’t get made unless we worked together as a team.

“Live For You” and “Sorry” stand out as melancholy songs on the album, what inspired these themes of heartbreak and sorrow?

J: Songwriting has always been a cathartic experience for me, but I guess writing “Sorry” was the Taj Mahal of catharsis. It isn’t referring to one person, but every failed relationship I’ve ever had. So it was my way of trying to explain why I was the way I was, and that it wasn’t anyone but me that needed to change.

A: “Live for You” was written after a close friend told me her relationship had broken down and that she was completely shattered. Most people have or will experience the same feeling at some stage in their lives. I’ve been there and at the time I was completely devastated. I thought I was going to be miserable for the rest of my life. I was inspired to really capture how it feels to be told that someone you live for doesn’t love you anymore. You start to have irrational thoughts like, “I’ll never be happy without this person in my life, so I will do anything or change anything about myself in the hope that they’ll fall back in love with me.” It’s also about the harsh reality of coming to terms with the fact that you can’t make someone love you when they don’t.

“Riding The Wave” begs for an audience sing-a-long, is a potential tour in the works?

G: We’re planning to head over to the U.S. in August for the Billboard Hot 100 Festival in New York City, so we are hopefully going to try and plan a few shows around that!

What advice would you give another band in getting back to songwriting after a huge hit, like “Geronimo?”

G: Having a hit song really does change a lot about the chemistry of your band dynamic. A lot more people with a lot more opinions become involved when your band starts earning money, and it can be very stressful. The most important piece of advice we learned: just keep writing music for yourselves. Write the music you want to hear. Don’t get caught up in the noise of ‘when’s the next hit coming?’ because it’s a really negative and unproductive place to write from. Your audience isn’t stupid. They really can tell when a song isn’t coming from an authentic place, so as long as you can keep it real for yourselves you won’t have any problems.

Any more visuals to come with the release of the album?

A: We just released a final single off the album – “Hometown.” We’re currently in talks about making a video clip for that.

What is each of your favorite tracks off the record?

G: I’d have to say the opening instrumental “Watching the Sky” going into “Coming Home.” It just feels so good. Gives me goosebumps every time it kicks in on the album.

A: “Live For You.” I love how vulnerable it is.

J: “Sorry.” It’s a massive song, and really personal to me.

G: Honestly, you guys rock. We really do feel like we have the best fans in the world. Thanks for having the patience to stick by us while we navigated this delicate balancing act of writing and producing a second album. We’re really proud of what we’ve done here, and we think you guys are gonna love it! We’ll see you in the U.S. real soon!