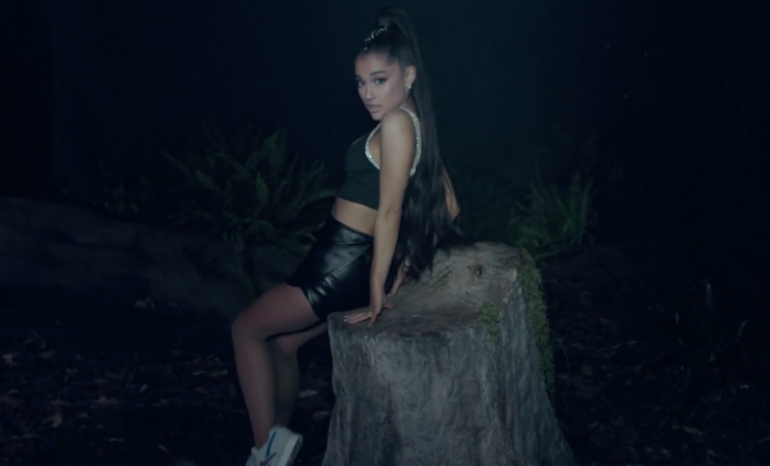 Ariana Grande released her new promotional single “The Light Is Coming,” off of her upcoming fourth album Sweetener. The single features Nicki Minaj, who collaborated previously with Grande on the worldwide smash hit, “Side to Side,” “Get on Your Knees,” and “Bang Bang” featuring Jessie J. Minaj and Grande also collaborated for another track, “Bed,” which is another single from Minaj’s upcoming album. Grande also released the music video for “The Light Is Coming,” which is directed by Dave Meyers. The track is produced by hitmaker Pharrell.

Since its release, the track has garnered mixed reactions from fans. Sonically, the track is very different from the sound Grande has established with two of her previous albums My Everything and Dangerous Woman. Personally, this track is not a direction that I hope Grande continues to pursue.

The main problem I have with “The Light is Coming” is that the melody is overshadowed by an obnoxious, repetitive vocal sample stating “You wouldn’t let anybody speak and instead” which starts five seconds into the track and is on a continuous loop throughout. Upon further research, I discovered that the sample was taken from a 2009 CNN clip. In the clip, there is a heated exchange between a man and Senator Arlen Spector, who at the time was the state of Pennsylvania’s senator. The clip went viral and is notoriously known as “town hell.” You can hear the man state “You wouldn’t let anybody speak” at 1:03 in the video below.

Interestingly, the above clip has also been used in N.E.R.D. and Rihanna’s collaboration, “Lemon,” which was also produced and written by Pharrell, who is a lead member of N.E.R.D. Twenty seconds into the clip, the moderator of the town hall says “wait, wait a minute” in a stutter, which is sampled in the track. A third track, “Master Race,” by Busta Rhymes, which was also produced by Pharrell, samples the track. It’s unclear why Pharrell continues to gravitate towards this track for sampling, but there is most likely something political that he is trying to say in all three of these songs.

Regardless of what his probable good intentions were, Pharrell tarnished what could’ve been a decent song with this obnoxious vocal sample. The chorus is catchy enough and has a decent beat, while the verses lack in comparison. While the song does have a good message (relying on positivity to power through tough times), it’s not enough to make this song more enjoyable to listen to.

The video is also a miss for me; it mainly features Grande prancing through the woods. Minaj opens the video with her verse, standing in the darkness among smoke with an interesting choice of attire (funky specs, high heels, and a large leather coat). Grande is then seen walking through the darkness holding a ball of light, which eventually disappears yet seemingly follows her around enough to provide enough light to make her visible. Halfway through the video, the atmosphere changes to a rosy pink tone with flashing pink strobe lights. This is what I believe is the supposed “light” that Grande is singing about, taking back “everything the darkness stole.” This light is only temporary, however, and then the darkness returns. Grande runs through the woods and finds still copies of herself; she runs into them one by one and they become her. The light reappears again when Grande sings the final chorus, where it shifts to solely pink strobe lights in the background before Grande walks off.

The concept is interesting, but a little too weird for my taste. Overall, the track and video are both a miss for me, which is too bad because I really enjoy the direction that Grande went with “No Tears Left To Cry,” which is her first single from Sweetener. We’ll have to wait until August for Sweetener to see if either of these tracks have a heavy influence over the other tracks on the album.