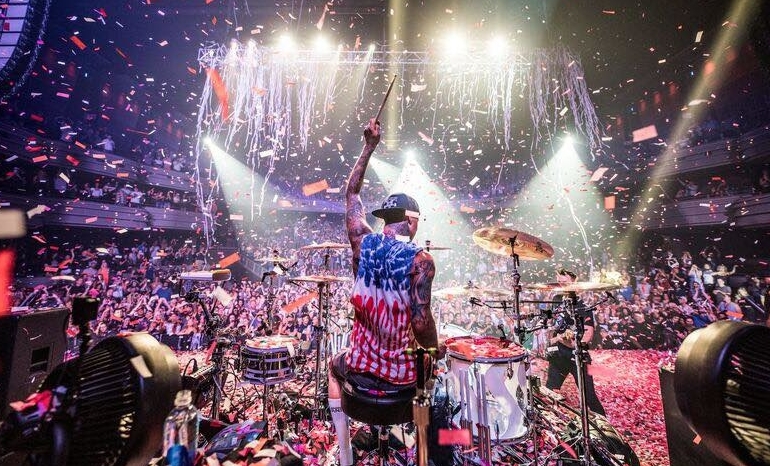 Due to ongoing health issues affecting drummer Travis Barker, Blink-182 has had to cancel another set of their Kings of the Weekend Las Vegas residency.

The legendary pop punk band known for tracks such as “Dammit” and “Adam’s Song” originally canceled two shows on June 15th and 16th of their residency at the Palms Hotel and Casino and have now announced that the June 23rd and 24th shows, which were the rescheduled shows to make up for the previous weekend, must also be rescheduled at a later date in order to allow Barker to return to health.

Blink-182 released a statement via Twitter regarding Barker’s health: “Unfortunately we will need to rescheduled the “Kings of the Weekend” residency dates at The Palms Casino this weekend (June 23-24) due to blood clots in both of Travis Barker’s arms. He has been ordered by his doctors to refrain from any activity that may cause further damage or cause the clots to travel. As it stands now, he will be prevented from playing until the beginning of July when everything will be re-evaluated.”

In addition to suffering from blood clots in his arm, Barker also developed a staph infection, according to a tweet he shared with fans.

Blood clots in both arms and a staff infection wasn’t the news I was hoping for. I’ll be back soon, thanks for all the love & prayers 🙏🏻

The 42-year-old rocker has been in and out of an LA-area hospital, according to TMZ. He was released on Monday June 18th but had to be readmitted the next day. Doctors are monitoring his response to blood thinners and making sure the clots don’t spread to his heart or lungs.

All of us over at Soundigest are wishing Travis Barker a speedy recovery! The band plans on making up the canceled dates in the fall, but in the meantime, the next scheduled dates of Blink’s residency are set to take place October 26th-27th, November 2nd-3rd, November 9th-10th, and November 16th-18th. Tickets are available here.