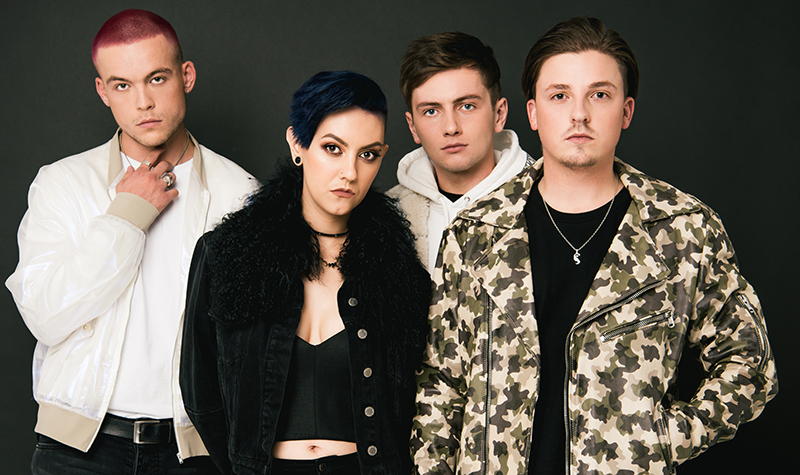 The musical world of bands welcomes Openside, a quartet composed of lead vocalist Possum Plows, PJ Shepard, Harry Carter and George Powell. With their most recent release “No Going Back,” they have plummeted themselves into the world of pop-punk. In addition to release, Openside has been featured on Billboard’s Queer Necessities Playlist. We had the opportunity to ask them a few questions, keep reading to see what we found out!

What inspired the name of your band, Openside?

We actually took the name from the position in Quidditch. We had no idea it was a rugby related term when we chose it, but because rugby is such a popular sport in New Zealand people ask us about it all the time.

How did it feel for you guys to be featured on Billboard’s Queer Necessities Playlist?

It’s always a little surreal when we get to be in such great company on playlists like that. We’re excited to be making music in a time when queerness is being celebrated so openly. I was so afraid to talk about it when we first started, so I’m super grateful to have that part of our narrative embraced by the music world.

What was the inspiration behind “No Going Back,” and what do you want people to take from it?

It was inspired by a phone call I had with my ex. We had been separated for about six months, and I was trying to figure out if our future was going to be together or apart. It can take a while to finally acknowledge when it’s time to move on from something that was such a huge part of your life, but that phone call was the moment I finally knew that it was time to close the door on that chapter of my life. I always like the idea of being very raw and open about the conflicting emotions you experience in life, and hope that the expression of it makes other people feel less alone.

This question is steered more towards Possum. What does it mean to you to be able to represent those in our community that identify as non-binary themselves? How do you feel this may help in the future for those who may want to pursue a career in something as cut throat as the music industry in general?

It’s definitely a responsibility that I take very seriously. Connecting with other queer people, especially young people who are still searching for their identity, is one of my favourite things about being in this band. Representation and community are super important and I want to use my platform and privilege to encourage diverse voices to feel safe enough to be visible and tell their story because everyone’s experience of being queer is different. The world is still learning, and it can be a scary place to just exist at all for some of us. You’re gonna feel that no matter what industry you’re in. I always want Openside shows to feel like a safe space for everyone to feel safe to just be themselves.

What do you enjoy the most when touring throughout different cities in New Zealand?

Meeting and connecting with the people! We’re still always blown when we visit a new town and people show up and know all our songs. There are often fans we know from social media too, so getting to meet them in person is awesome. Bringing more all ages shows to cities in New Zealand is a mission very close to our hearts. Young music fans are the soul of the music industry.

Do you have any dream collaborations whether being for songwriting/singing?

So many people! Collaborating is one of our favourite parts of songwriting. For me personally, it would be a dream to work with queer icons like Hayley Kiyoko, Troye Sivan and Kehlani.

What is the writing process like? How long does it usually take to completely develop one full song?

Each song is different, but we like to write in the studio with about 3-4 people. We often work with co-writers too, so each process is a reflection of the hearts and minds of the people in the room at the time. Some songs, like “No Going Back,” are basically written and recorded in their entirety in a couple of days, but other songs are worked and reworked for months before we get them right.

Many fans have been asking for a United States leg of your tour. Can we being expecting that from you soon?

This is something we are so excited to do! We love love love the United States and we can’t wait to get over there to play some shows. Nothing is locked in yet, but hopefully we will be there very soon.

What is your favorite part when it comes to creating music videos?

It’s always exciting to be able to create a visual companion to your songs, because you can do so much more storytelling when you add the visual elements. We’ve been working with this amazing director, Shae Sterling, for the past couple of videos and he has such a visionary mind, we love collaborating with him on how to bring the songs to life.

What do you hope to achieve within these next few coming months?

We have been in the studio non-stop for the past year, so we have a lot of new material we are eager to put out. We just wanna play more shows and use our music and our live show to connect with more people.