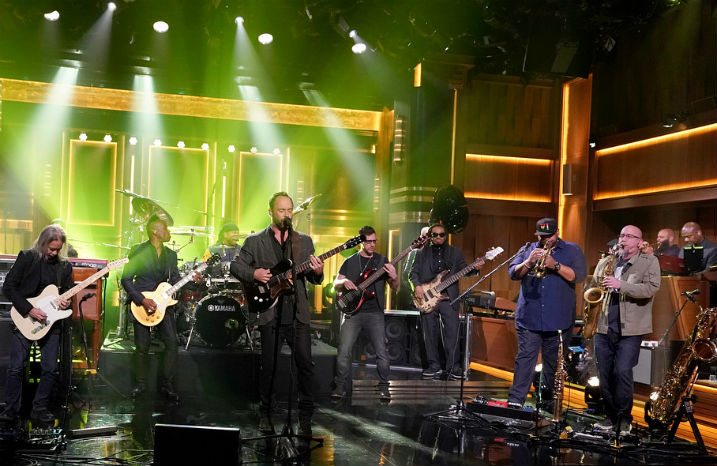 Dave Matthews was recently on The Tonight Show Starring Jimmy Fallon, and along with performing two of his own songs.  He also gave viewers a hilarious sketch featuring some of the most known trap songs of today.

This sketch was delivered commercial style, mocking the old compilation CD commercials.  The clip showed Fallon playing one of his many characters, wig and all, as he sells a fictional album featuring Dave Matthews. Entitled, Dave Matthews Sings Trap Music, the track-list teases some of the biggest trap hits with a “more jamin’, earthy sound”.

Introducing the commercial Fallon leads into the album as, “[The] master of the outdoor jam band brings you 25 of the dankest, tastiest trap tunes ever recorded.”

Matthews sings parts of Migos’ “Stir Fry” as well as Lil Pump’s “Gucci Gang.” They also offered a bonus album if order right now called, ,Dave Matthews Sings Cardi B, on the album with Matthew’s rendition of Cardi B’s “Bodak Yellow.”  With outdated video backgrounds showing the easy production and Matthews hitting the sound effects just right, this is something we never knew we needed until now.

The album comes with Matthews’ rendition of “Hard in Da Paint” by Waka Flocka,  “MVP (NGHTMRE Remix)” by Flosstradamus and feat. Smokepurpp, “Trap Ish V.13” by UZ and “Propaganda” by DJ Snake.  They even added some made up songs and artists for add effect.

The sketch also directed to purchase the album at http://www.davetrapthews.com/, which simply redirects to The Tonight Show’s website, but is a killer URL name if Dave Matthews ever decides to actually produce a trap album.

The Dave Matthews Band then went on to perform their songs “Samurai Cop (Oh Joy Begin)” and “She” off of their latest album.

Check out the sketch below and let us know what you think in the comments or tweet us @soundigest !