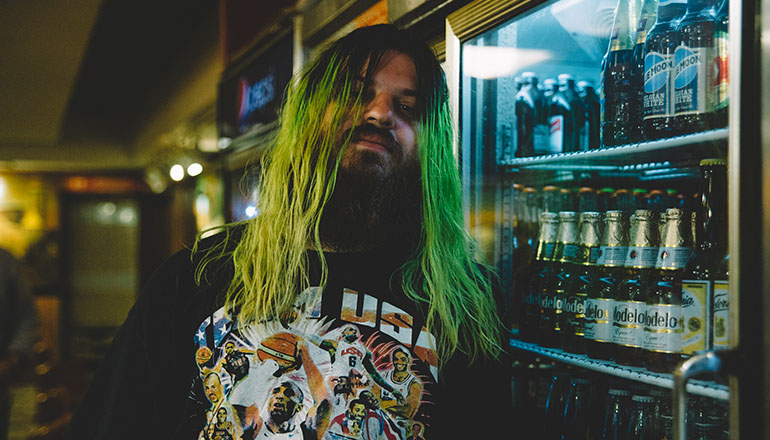 I first met lil aaron at his 24th birthday party/ album release on May 31st in Los Angeles. His second EP as a solo artist ROCK$TAR FAMOU$ was dropping that night and after a year and a half of hard work, he was ready to celebrate. He mingled with guests and friends and sang his heart out to his own lyrics. “We feel highs and lows in life,” he said that night, “but tonight I’m feeling high.”

Aaron’s been enjoying a wave of highs, as of late. The weekend after his album release he celebrated by opening up for Blink-182 in Las Vegas and rocked his first and last Warped Tour stage, with the sunburns to prove it.

Although his summer’s off to a great start and he’s looking into some possible touring, Aaron’s main focus right now is promoting his baby, ROCK$TAR FAMOU$.

Since his 2016 EP, GLOING PAIN$, lil aaron’s made a name for himself in the emo rock/ hip hop scene as an artist unafraid to merge genres at the forefront of a music scene that’s just beginning to thrive.

He’s had the unique opportunity to be a front runner of the trap/ emo rock / grungy punk movement that’s got a growing fan base of teens, new school hip hop heads and people longing for the nostalgia the 2000’s. What started as an underground experiment has quickly gained mainstream attention. “Early on a lot of people didn’t get it,” he said, “but now, a couple years later, people are starting to warm up to it.”

Almost as notable as the music is the sense of community the scene has been able to garner. “What’s been cool is seeing all my friends come up together, when two years ago we were all dirt broke, sleeping on each other’s couches. Everybody has each other’s backs.”

But creating an album in this scene isn’t just mashing up different genres. “I really wanted it to be this nostalgic emo-punk thing from the 2000’s, meets the music of today.” After two weeks of writing with producers in Hawaii, Aaron had over 100 songs to bring back to L.A. and flesh out. “That was the hardest part,” he said. Eventually, it came down to the seven songs he thought fit the best together and hit all the niches his fans expect. “I wanted to make sure each of the seven songs hit every different angle I wanted to cover. It is difficult finding every side of what I wanted to hit, but I’m very happy with how it came out.”

As for the features, Aaron went with “some of the baddest bitches I know” and Blink-182’s Travis Barker. He wanted the EP to reflect his own favorite artists and since he’s been friends with Kiiara and Kim Petras for years and a fan of Rico Nasty’s, he opted to unleash some female power. “QUIT,” his hit single with Travis Barker, perfectly tied in the nostalgic rock feel aAaron wanted, while the ladies brought the hip hop, punk and pop.

Although his goal for GLOING PAIN$ was to get people to notice him, he wants ROCK$TAR FAMOU$ to now make them pay attention. GLOING PAIN$ marked the beginning of his solo artist career, whereas before he’d been well-known as a gifted songwriter. Writing songs for Louis the Child, Hailee Steinfeld, Icona Pop and Kiiara put him on the music map. However, Aaron has been a performer at heart since middle school and couldn’t get rid of the artist bug. “Being a songwriter is more behind-the-scenes, which is cool, but when you’re an artist—especially the artist with green hair—people remember you.” Dealing with internet trolls and new expectations as an artist are part of the job description, and Aaron’s accepted that. He hasn’t completely given up the comfortable shadows of songwriting, though. In fact, “Boys,” the seductive new summer single that’s just been released, was co-written by him and rapper Lizzo a few years ago. “There’s definitely a lot more eyes on you as an artist,” he said. “I totally love both aspects of it and I wouldn’t give up either side, but it’s cool to be able to jump back and forth whenever I feel like it.”

Despite his neon green dye job, lil aaron exudes humility and realness. When I asked if he ever worries that getting bigger will force him to compromise his authenticity, he answered with a confident “No.” He knows he needs a supportive team to make his dreams happen, but he’s not afraid to say goodbye to anybody that doesn’t share his vision. He’s inspired by artists like The Weeknd, who have managed to create chart-climbing radio bangers while staying true to their day-one sound. “I’ve made it a point not to work with anyone who’s trying to comprise my artistic integrity,” he said. “I think that’s why people like me.” He’s right.

Aaron has a vision. For now, he’s working on hopefully putting together a tour and getting the word out about ROCK$TAR FAMOU$, but Aaron has bigger goals. “I personally see myself selling out stadiums, arenas, being all over the radio, being well-regarded, one of the biggest artists in the world.” He knows that in order for him to succeed he’s got to elevate his scene, but he’s got a good feeling about the sense of community and perseverance among his fellow trailblazers. He’s a music mixologist who wants to be known for his genuine sound and believes his authenticity and unwillingness to quit are his ticket to the big-time. “I don’t see any limitations.”