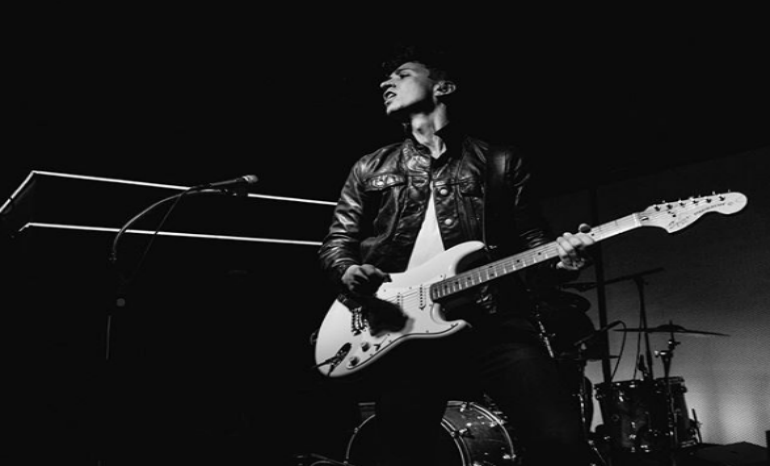 A few months ago, we shared our review of Des Rocs‘ debut single “HVY MTL DRMR.” (Spoiler alert: we loved it!) Since then, he’s released a new song called “Used to the Darkness” and is planning to release more music very soon! We spoke with Des Rocs about his musical inspirations, the song he wish he had written, and his upcoming show at Rough Trade on July 10th in NYC!

You’ve released 2 singles so far as Des Rocs (“HVY MTL DRMR” and “Used to the Darkness”) which are both FANTASTIC! What inspired you to write and create these tracks?

The beginning of Des Rocs was an uncertain time. I was alone in a sea of people day and night – running around the city and writing in coffee shops until they kicked me out. There was a profound sense of isolation that allowed me to dig into parts of myself I hadn’t written about. Both HVY and Darkness were born from this period.

Were there any artists/bands you listened to that helped influence these songs?

What’s it like performing as a solo act vs. in a group?

It’s still a band up there on stage, so there’s still the same punch to it. Not a huge difference really.

You’ve performed with an impressive list of A-list acts like Fall out Boy, Weezer, The All-American Rejects, Bebe Rexha, Nate Ruess…I can keep going! Who was your favorite artist/band you’ve played with?

They’re all really incredible and it’s tough to find a favorite. Nate was the first real tour I was ever on, watching his set every night taught me a lot. He brought a certain magic to the performance that I envied.

What other songs will you be playing at your upcoming Rough Trade show? Any Secret Weapons tracks?

I’m playing the rest of the songs from my debut EP, (coming this fall). No S.W…Gerry had a crazy high voice and I ain’t gonna try hitting those notes.

When can we expect more music? (2 tracks aren’t enough!)

Song you wish you wrote? “You Got It” – Roy Orbison

Your least favorite song of all time? I need a year to think about this.

You can play on a line-up with any 3 artists/bands, dead or alive, who do you choose? Perry Como, The NFG, and  The Doors