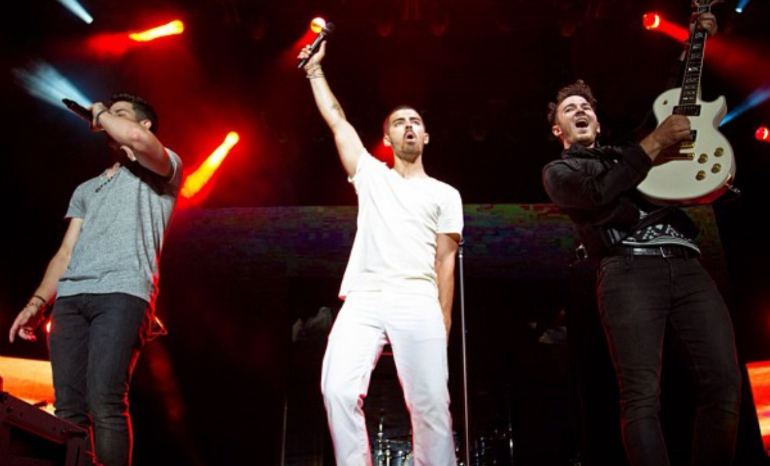 The Jonas Brothers broke up back in 2013. Nick and Joe Jonas, have continued to release music; Nick as a solo act and Joe with his band, DNCE, while Kevin Jonas has been focusing on raising his two daughters. However, the brothers were spotted all over Australia with a film crew in tow. Could the brothers be reuniting the band?

Well, nothing’s certain just yet. After filming in Australia, the trio posted their annual Fourth of July photo together on Instagram. Younger brother Frankie Jonas also joined in the picture.

The trio was also spotted at what fans believe is the Al Hirschfeld Theatre in NYC, where Nick performed in the Broadway play, How to Succeed in Business Without Really Trying, back in 2012.

The brothers (minus Kevin) also enjoyed a bike outing in NYC. Joe was joined by his fiancé, Sophie Turner, and Nick was joined by his new girlfriend, Priyanka Chopra on July 5th. That same day, all three brothers were spotted filming again in Times Square and allegedly continued to film at MTV’s TRL Studios.

Currently, the brothers have been spotted all over Cuba, again with a film crew in tow. Several fan pictures were spotted on Instagram:

And all three brothers were seen with instruments in hand later that day in a public place in Cuba.

Behind the scenes: Nick, Joe and Kevin playing music in Cuba! 😱 pic.twitter.com/G9kDaa3el5

The brothers aren’t hiding the fact that they’re in Cuba either. Both Nick and Joe have posted on their Instagram stories about how beautiful Cuba is. The question is, why are they playing music outside in Cuba and filming? What could they be filming for?

One thought on “Are the Jonas Brothers Reuniting? Here’s Everything You Need to Know!”