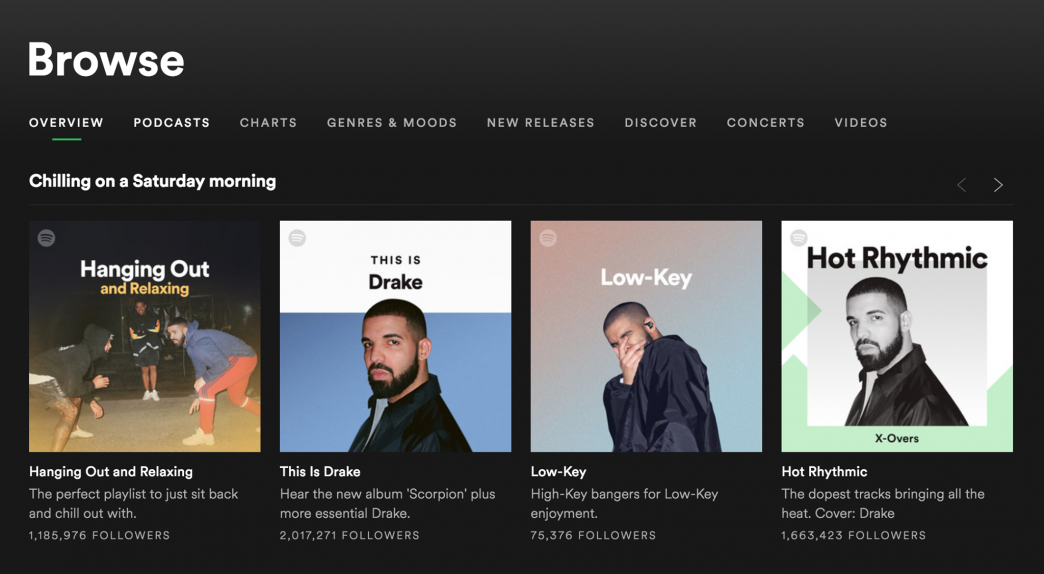 If you’re a Spotify user, you’re likely well aware that Drake’s newest album Scorpion came out at the end of June. Scorpion’s release was accompanied by an excessive amount of advertising on Spotify’s platform, which, in addition to displaying the usual banner announcement, plastered the Canadian rapper’s image on dozens of playlist covers. Curiously, Drake’s face even appeared on playlists completely irrelevant to his own music, such as Ambient Chill and Bachata Lovers, none of which featured his songs.

Spotify’s over-the-top promotion did not go unnoticed by its customers, resulting in a range of reactions. Some premium users were reportedly successful in requesting a refund for a month’s subscription, while others questioned whether the shameless promotion was really that big of a deal. Dubbed “ScorpionSZN,” the bombardment of advertising was the result of a deal struck between Drake and Spotify and is the music platform’s first attempt at an artist takeover. The incident is reminiscent of the iTunes/U2 debacle back in 2014, when Apple’s partnership with the Irish rock band led to millions of iTunes users waking up to find Songs of Innocence automatically downloaded into their music library.

When a prominent company takes advantage of its extensive customer-base, altering its user experience for the sake of business, questions about privacy and personalization in the digital age naturally arise. For a paid service like Spotify Premium, is including Drake’s face on every single playlist on the homepage a violation of the ad-free experience users were promised, or merely a slight annoyance? With algorithmically-generated playlists like “Discover Weekly” and “Release Radar,” Spotify users have come to expect the product to cater to their personal music tastes, but it’s entirely possible for the company to slip in any song they wish to promote. Drake is perhaps the least offensive rapper in the current hip-hop world, but how would reactions differ if this had happened with other artists? Spotify has taken clear stances on artists before, removing XXXTentacion’s music from featured playlists in response to the rapper’s assault charges and then revoking the policy weeks later. Whether it’s censorship or advertising, Spotify is learning to walk these fine lines as it deals with the responsibility of being one of the most popular music streaming platforms in the world.