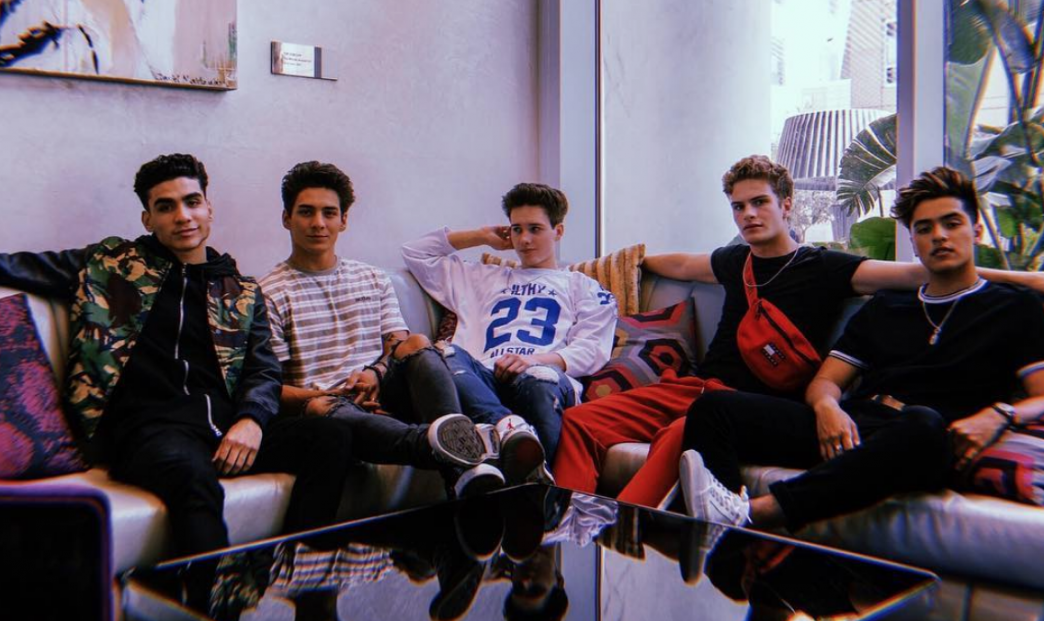 In Real Life just released their newest single, “Tonight Belongs To You,” this morning and it is a bop! From the summer vibes, to the latin influence, to the chorus that will be stuck in your head, this song has hit written all over it. The boys have had a pretty busy summer performing on numerous radio shows and hitting the road on the American Idol Live! Tour. The group is not slowing down just yet though, In Real life recently announced their first heading tour the Tonight Belongs To You Tour in the fall and have been releasing hit after hit ever since.  Keep reading as we discuss their success, new single, and upcoming tour!

Congrats on all your success so far, you guys just celebrated your one-year anniversary of the beginning of your journey on Boy Band on June 22nd. If you could sum up this year into three words what would it be?

Brady: If I had to sum up the year in three words, they would probably be: amazing, unfamiliar, and rigorous. These past couple months have been the best in my whole life, but we’ve also been working very hard to try and make an impact in this industry that’s so new to us.

Performing on shows such as Jimmy Kimmel Live, TRL, Live with Kelly & Ryan, Good Morning America, and Despierta America has to be dream come true. Did you ever think you would see yourself performing on these shows a few years back?

Chance: A few years back, I never thought I would be performing on TV. We’ve been working so hard, and to see that it’s all paying off, means so much. I couldn’t be happier with where we’ve been and what we’ve accomplished this last year.

I’ve heard your single “Tattoo (How ‘Bout You)” literally everywhere I go, I can’t escape it! How does it feel having your first Top 40 radio hit?

Drew: It’s crazy to think a year ago today we were all just living normal lives. We went to school and did what any teenage kid would do. Hearing our song on the radio and getting it into the top 40 is so rewarding. No one knew exactly what would happen when we won the show and we couldn’t be more happier with the result.

You guys also released an acoustic version of the song to celebrate your anniversary. What does this song mean to you personally?

Michael: This song means a lot to us. It was one of the first songs of ours where I had it on constant repeat because I liked it so much.

You seem to be keeping busy this summer with festivals and radio shows all over the US. Who are you most excited to share the stage with?

Sergio: I think that we’re all very excited to meet Bazzi. He is definitely a group favorite and we’ve been listening to his music as a group for a long time now. We are excited to meet everyone, honestly. We’ve been together out on the road for a few months and being able to perform on the same stage as some of our idols is a big deal for us.

Hitting the road and opening for the American Idol Live Tour has to be something you all are looking forward to. Can you give us any hints on what songs you will be performing?

Brady: We are doing our singles that are already out, some new songs no one has heard yet, and some really cool new covers that we haven’t performed yet.

Speaking of touring you guys announced the Tonight Belongs to You Tour last month! How excited are you that this is your first ever headlining tour?

Chance: I’ve been anticipating this tour for so long! I can’t wait to get out there and share all the new songs and choreography that we’ve been working on. This life is every childhood dream I’ve ever had, come true. Tonight Belongs to You Tour is going to be one to remember.

What can fans expect from the tour?

Drew: The fans can expect new music and new choreography. They’re going to see something completely new from us. We’re putting our all into this show and we hope our fans will love seeing something new!

You just released your fourth single “Tonight Belongs to You.” Can you tell us the meaning and the process of creating this song?

Michael: “Tonight Belongs To You” is one of our personal favorites, I remember it was one of the easiest songs to record. It came together really easily and it’s one of the most fun to perform. The song has elements of both pop and Latin, and the chorus is so much fun for us to sing.

What else can we expect from In Real Life for rest of the year?

Sergio: We are going to be traveling so much! We’re very excited to perform in so many different places and keep on releasing new music.

If you could switch places with any of your group members who would it be?

Brady: I would probably switch places with Sergio because I’ve always wanted to live near San Francisco. Also his mom makes really amazing Mexican food, which is one of my favorites.

Chance: I would switch places with Drew because New York is one of my favorite places to be. I’ve always wanted to live there.

Check out the video for In Real Life’s new single “Tonight Belongs To You” below.