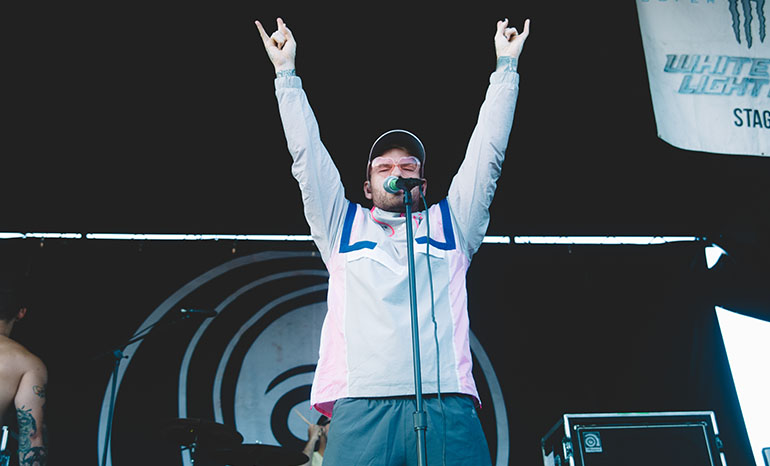 When thinking about the veterans of the emo scene and Warped Tour, one of the artists that comes to mind is Senses Fail. The band has been around for over 15 years now, and no matter how many obstacles they’ve had to overcome, they’re still here and doing better than ever. When we were told we had the opportunity to interview Buddy Nielsen, SF’s frontman and only original member, we were overcome with feelings of excitement and nervousness, as Nielsen is such a staple in the Warped Tour music scene. With Buddy, we discussed the band’s collective internet obsession with Demi Lovato, being a Warped Tour veteran, and what they have planned next. Check out the interview here:

So I have to ask… what’s with the Demi Lovato tweets?

Are you a fan? Do you want to collab?

We made a video for Demi Lovato. I don’t know, just trying to be friends with people. Trying to branch out, make new acquaintances!

She’s very into the scene!

I know! That’s why we thought we had a shot! But we still haven’t talked to her.

Alright, as a Warped Tour veteran, how does it feel with the tour ending?

Yeah, I don’t know. I never really think about it. I don’t know if it’s going to hit me until it’s over. We’re kind of in the middle of everything. I know it’s been really fun for us. It’s been a lot of the band’s career. You know, we’ve done this tour a lot. It’ll be weird to never do it again, but I’m hoping it morphs into something that’s more of a Riot Fest type thing.

Yeah, that would be great!

Still able to do the fest in certain places, as far as traveling. I don’t know… I feel lucky that we got to do it on all of the biggest years. 2004, 2005, 2006 and then I’d say now is one of the biggest years, too. We’ve gotten to do some of the best years of Warped Tour. Not every year is as awesome. Some years are hit or miss, so we were super excited to be able to do that.

Cool! So this year has been really great for your newest album, If There is Light, It Will Find You. What else is coming to this era?

We have a tour planned for the fall! We’re going to re-record our first EP. We’re going to try to record most of our songs acoustic and put them out.

Yeah! Well, most of it is going to be geared toward stuff for our tour. Meaning you can only get it if you come to the tour.

And then we’ll probably start working on another record at some point next year. Not too long from now is our 20-year anniversary, so we have a lot of stuff over the next four years planned, as far as new music, recreating some old stuff in conjunction with doing this acoustic stuff. We’ll probably do a tour where we do the songs acoustic. Do more of a toned down, unplugged type thing, which we’ve never done. I think that could be really cool, especially for our hardcore fans that want to hear some of the more obscure songs that we don’t get to play all the time. We’ve got a lot of stuff planned, just about touring right now and touring on the new record.

Great! So, obviously a lot of your music has a lot of emotion, especially this last album, like “First Breath, Last Breath.” That was very deep. Is it easy to write down all of these personal experiences and perform it in front of all of these people? I can’t imagine that it is.

That one was kind of hard to perform. It was really hard because it also starts off with just the vocals. I’ve had some trouble playing that one live. On this record, I think sometimes there’s a little more emotion than some records.

I appreciate all of the support. We’re stoked to still be a band. Thank you!