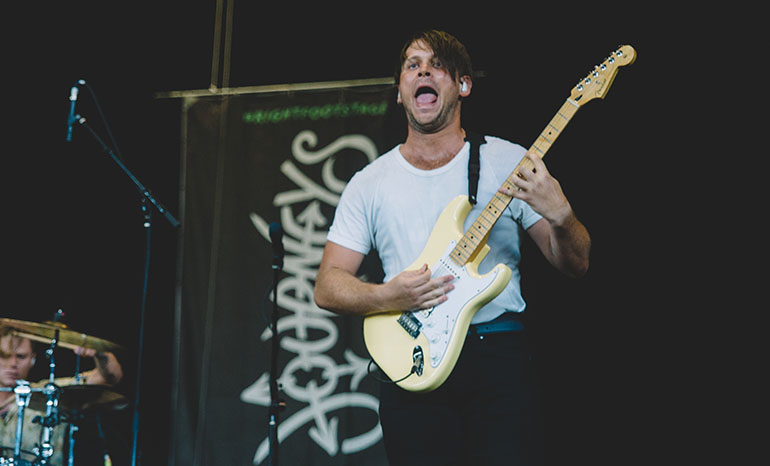 Imagine this: you’re at home in Australia, watching YouTube videos of a touring festival in America called the Vans Warped Tour. Years later, you’re in a band called Tonight Alive and you’re asked to come over to America four times just to tour on the festival. Everything is pretty full circle, right? At one of the last Warped Tour dates, we got to sit down and talk with Jake Hardy, the guitarist of Tonight Alive. We talked about Warped Tour, their latest album, Underworld and more!

So Underworld came out earlier this year. How has everything been since then? It’s been a lot of touring, right?

Yeah, we started off the year with a 3 month stint. We did the states first and then from there we went to the UK and Europe, Russia, Eastern Europe. Then we went home and had like a month off. We did a headline back home and then we had another couple of weeks off and then it was time for Warped! So it’s been a pretty busy start. It’s always like that whenever we put out a new record!

So what’s next for this era?

So after Warped we have a little bit of a break. We have a couple of things we’re working on at the moment. So hopefully we’ll be touring for a bit more this year and then the start of the next year.

Awesome. So on the album you collaborated with Corey Taylor of Slipknot. How did that all happen?

So Jen, our singer, met Corey at Soundwave, which is a giant festival, a couple of years ago. He came up to her like, “I love your band!” and she was like, “holy sh*t! That’s crazy. I love your band!”

So they kept in touch on Twitter. We were doing the record and we were talking about features and Jen was all, “maybe I’ll just message Corey.”

Why not? It’s worth a shot!

Is it still pretty surreal?

Yeah! We had a kid pop in the other day who said he went to meet Corey and see Slipknot and took the Underworld vinyl and got it signed by Corey! It’s insane.

Yeah, so I really like to see that happen.

Warped Tour is obviously ending. How does it feel as someone who’s done Warped a few times now that it’s coming to an end?

It’s a little surreal. I think it was one of those things that everyone thought would be around forever. It’s going to be sad. It’s really going to hit home when everyone’s trying to book tours for summer next year and everyone’s like…

Everyone relied on it all of the time! It was alive for 25 years – making sure there was something for summer.

There are other festivals, weekend-long ones here and there, but there’s nothing this big.

Yeah, exactly! It also only really helps when you’re within short proximity to the actual festival. For us, it’s not worth flying to the States for a couple of one-offs. It has to be a full tour. Warped Tour for us, we grew up watching online at home, hearing stories about Warped Tour and then for us being on the tour, playing and pretty much getting our start in the States because of Warped Tour… it’s the end of the era. It’s one really good way of getting exposed to a huge and really diverse market. It’s sad.

So since you’re from Australia, you’ve been coming here a lot now. Is it still different? Is it scary?

Thanks Warped Tour for having us for four years!