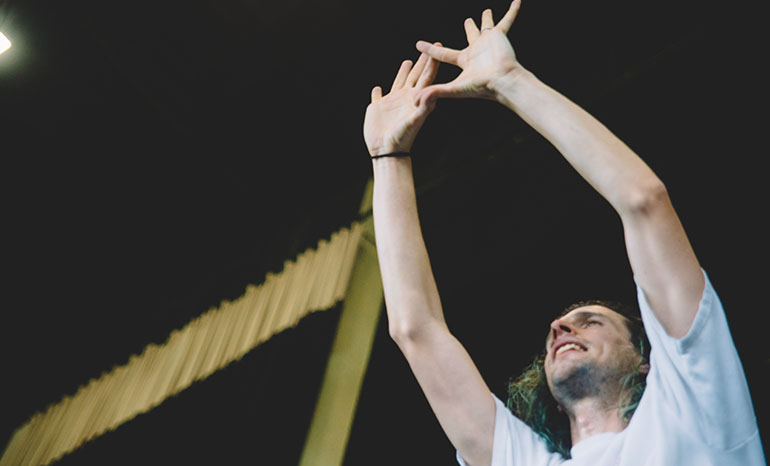 “Couldn’t wait for the summer and the Warped Tour…” is the lyric we’ve been literally and figuratively screaming since blink-182 dropped their hit, “The Rock Show” back in 2001. Sadly, this will be the last summer that this lyric holds its true meaning. A few months back it was announced that 2018 will mark the Vans Warped Tour’s final cross-country tour, and of course, we’re super sad about it.

Of course, we couldn’t let the tour end without some coverage from Soundigest. We ventured into Connecticut this past weekend and watched amazing sets from older acts like 3OH!3, Simple Plan and Four Year Strong, to newer ones like YUNGBLUD, Movements and Waterparks. It was really bittersweet attending to one of the last Warped Tour dates.

Ten years ago this month, I attended my own very first Warped Tour date. I saw bands like Mayday Parade and We The Kings play on tiny side stages, and it was my first time actually seeing both bands perform live! Ten years later, they’re both headliners on the main stages, and they’ve experienced so much success over the last ten years.

At the Hartford, Connecticut stop, I got to speak with a few acts, but one that was really special was Buddy Nielsen of Senses Fail. SF has been playing Warped Tour since the early 2000s. When discussing how it feels as a Warped vet for the tour to be ending, Nielsen said, “I never really think about it, I don’t know if it’s going to hit me until it’s over. We’re kind of in the middle of everything. I know it’s been really fun for us. It’s been a lot of the band’s career, you know, we’ve done this tour a lot.”

As you can tell, it’s extremely bittersweet to have this tour end. As a fan of the tour since I was an early teen and growing with the bands, it’s an eery feeling. While walking the festival grounds in Hartford, I saw all of these band members bonding. Backstage, while I was watching Mayday Parade, I saw We The Kings frontman, Travis Clark, sitting on the drum riser rocking out the whole time. Clark even went on stage with 3OH!3 to perform “Starstrukk” with them! All of the band and crew members seem to always form a nice bond, to the point where they’re a touring family. When talking to YUNGBLUD, he said, “It’s such a community and I love it. It’s got such a f**king energy that allows to be so fundamentally yourself.” Growing up, there was a joke that Warped Tour was similar to a “pop punk day camp.” All joking aside, it’s completely true.

Every once in a while, Warped Tour has gained a lot of hatred for some of their decisions. Kevin Lyman, the tour’s founder, has been criticized for letting Jake McElfresh, also known as Front Porch Step, and Ronnie Radke of Falling in Reverse play dates on the tour in recent years, when they’re known predators and abusers. Questionable partnerships with pro-life organizations have been on the tour as well. The list can go on about all of the negativity brought out at the tour, but at the end of the day, this touring festival has done a lot for music of all genres.

Warped Tour kicked off the careers of many, but two heavy-hitter careers include Eminem and Katy Perry. The tour provided a summer home for artists and fans of all ages. Warped Tour was a judgment-free zone that fans could attend and have a day to live their best lives.

As of now, no one knows what the future holds for the Vans Warped Tour. In the initial release regarding the tour’s ending, it was stated that this was the end of the cross-country run. Will Warped Tour turn into a west coast and east coast festival? Will they take a break for a few years and come back? We’re not sure, but until then, goodbye Vans Warped Tour. We hope to see you again soon.