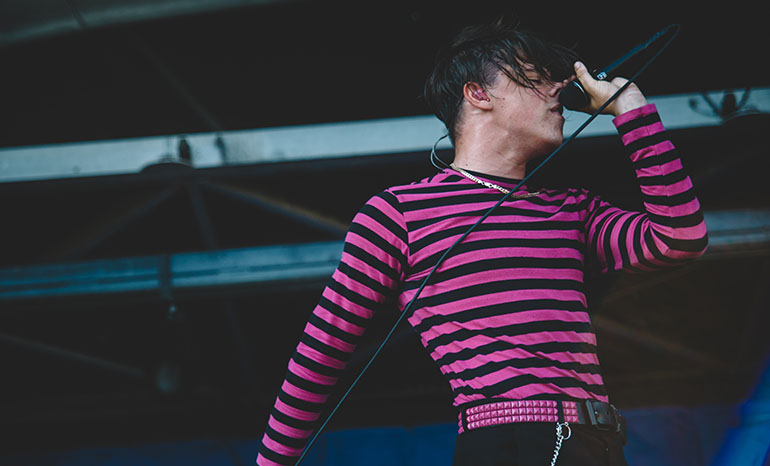 Over the last few years, there have been a few artists that we knew for a fact were going to change the music industry, but even more importantly, they went on to change the world. YUNGBLUD is going to be one of those types of artist. Also known as Dominic Harrison, YUNGBLUD is an English artist who has a message, and who doesn’t stick to one genre. He draws his inspiration from rappers, pop artists and rockstars. The best part? YUNGBLUD has no filter, which is what sets him apart while also drawing people in. At the Hartford stop of the Vans Warped Tour, YUNGBLUD discussed his debut music, touring, traveling, and having a message.

So your debut EP, YUNGBLUD, and album, 21st Century Liability, both came out this year and you’ve been super busy. How is everything for you? It’s been a constant whirlwind, right?

Yeah, man! It’s just been absolutely crazy. I haven’t been to America a lot and to be on Warped Tour and to have 400, 500 kids turning up at every show, singing every lyric to not just the song that went to radio; but every single song.

Especially since you’re so new too!

Totally, man! It’s crazy. I’m a bit of an outcast. I’m just fucking ready to go. Everyone around me is like, “this is happening really fast. Are you okay with that?” And I’m like, “I’m f**king ready!” You know what I mean? It’s amazing already the amount of connection I’m having with my fans. The amount of DM’s I respond to and I get a day – a thousand. It’s mental for me! This record is… an outlet for people that can’t be themselves or can’t say what they think. It’s crazy, it’s been such a mental year.

So who are some of your influences? You have such a mixed genre of music. Who do you look to when you’re recording and writing?

I mean to be honest, there are loads of people. It varies – I love Eminem, I love Alex Turner of the Arctic Monkeys, I love Post Malone, I love Twenty One Pilots, I love The Clash, I love f**king James Brown, I love Kanye West, I love Jessie Reyez, I love Billie Eilish, I love Joan Jett. There are so many different genres of music. To me, I don’t want to be an artist that’s genre-defined. I want to mix it up!

Yeah, totally! I don’t want my next record to sound like my last record. I want people to be like, “what the f**k! YUNGBLUD just did that!” I can’t wait for the collaborations.

Do you have any dream collaborations?

Yeah and they kind of came true! They’re coming out actually.

Is there anyone else that you would like to collaborate with that you haven’t currently collaborated with?

I think I’d like to do a collaboration with Lorde!

That would be really cool.

Just something to be out and about like really “wow.” Or Halsey!

I saw you guys tweeting each other on Twitter!

Yeah, it’s crazy! I love Halsey. To me, she’s not an annoying pop star. I want to be like that.

I feel like you’re both very similar in the sense where you’re pop artists but you’re not stuck in that mold.

So since this is your first Warped Tour and the last. How has it been so far for you?

Amazing! It’s kind of crazy. It’s such an opportunity to meet my fans and have a conversation or whatever. I’m having the best time ever! At the end of the day, I told my band that I don’t want to be that band that complains about being on tour. We’re in f**king America in a tour bus for the first time ever!

Some people don’t even get the opportunity to be on the tour.

Exactly. A lot of people get to the point where they’re like, “oh I’m tired…” but you know what? F**k that! We’re so lucky to be out here. We love it. It’s such a community and I love it. It’s got such a f**king energy that allows you to be so fundamentally yourself. It’s amazing.

Totally. So you’re from the UK and this isn’t your first US trip, but you’re still pretty new here. Is it scary for you?

Nah, man, I have always wanted to break the US! It’s exciting. I always love a challenge. Fear turns into excitement for me. People always go, “where did you get your energy from?” And I don’t know, it just drives me. I’m just excited. I’m f**king excited to go. I want to reach as many people as I can. It’s crazy how international some of the messages have spread. I’m going to Australia on Tuesday and I can’t wait! I’m going to do my headlining shows.

Is there anywhere that you haven’t been yet that you’re dying to go to?

You have a reason and a purpose.

Exactly. It’s a naive way of looking at us. We have a reason and we have a purpose. We’re so f**king smart. There is a change coming; it’s inevitable. We’re so clever. My message is to be yourself and say what you think no matter what.