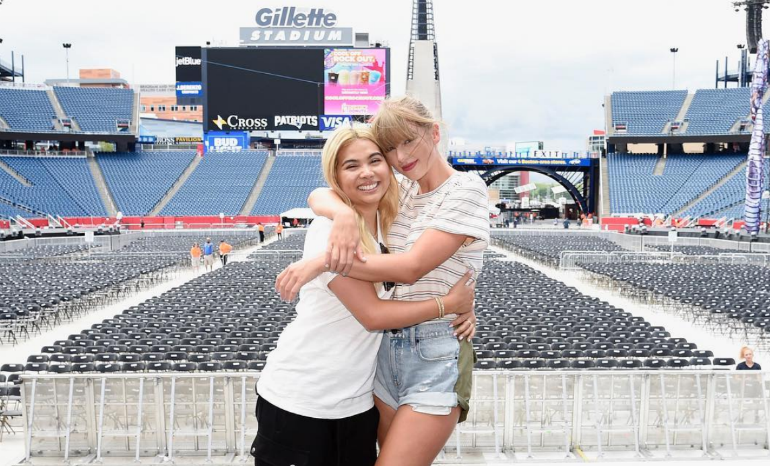 Taylor Swift stopped by Gillette Stadium in Foxboro, Massachusetts last weekend on her massive, worldwide Reputation Stadium Tour. On the first of three nights at the stadium, Swift brought out Hayley Kiyoko as a special guest. Together, the two sang Kiyoko’s song, “Curious,” a single from her debut album Expectations.

Kiyoko is affectionately known by her fanbase as “lesbian Jesus” because she is an open lesbian mainstream pop artist; there are only a handful of them currently. The songs on Expectations tackle Kiyoko’s experiences in relationships as a lesbian woman. The lyrics of “Curious” suggest that a woman left Kiyoko for a man, and Kiyoko “is curious” if their relationship is as serious as the one that she and the woman once shared.

Interestingly, Kiyoko brought up Swift in an interview earlier in March as an example of an artist who has the ability to make a bulk of the subjects of her music videos a love story between a man and a woman. The exact quote from Kiyoko was “Industry execs say ‘You’re doing another music video about girls?’ I was like ‘Um… yes. Taylor Swift sings about men in every single song and video, and no one complains.'”Fans were quick to jump on Kiyoko, believing she was “shading” Swift. However, Swift put those rumors to rest by reblogging a fan’s statement about the alleged “shade” and responded to Kiyoko’s quote with support on her official Tumblr profile.

Fans were understandably excited that Swift vocalized her support of Kiyoko. They were simply ecstatic to see Kiyoko perform in front of her first ever stadium crowd with Swift.

Taylor Swift singing Curious with the lesbian jesus herself Hayley Kiyoko is the epitome of 20gayteen pic.twitter.com/ZFZrNbbn8c

Swift does not often involve herself in media drama or discuss her opinions on controversial issues like politics, etc. It’s clear, however, especially from bringing Kiyoko onstage with her, that Swift is a huge supporter of the LGBTQ+ community and wants more voices like Kiyoko’s to be heard.