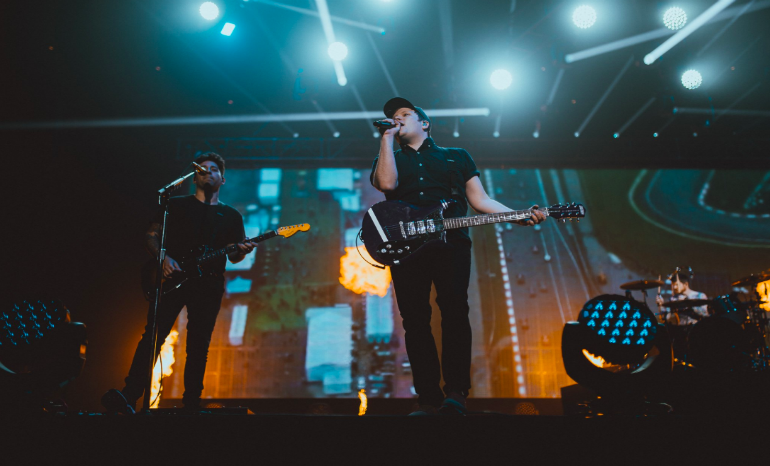 Fall Out Boy has always known how to truly appreciate pop. Over the years, they’ve covered some hits like Uptown Funk and Beat It, to name a few. They never disappoint with their covers and their newest one, Ariana Grande‘s “No Tears Left To Cry,” performed at SiriusXM’s latest Celebrity Session, hits the mark.

“I’ve actually never played this song ever,” Patrick Stump said before going all out into the acoustic rendition of the song. They also played a few of the hits off their last album, Mania. In this session, they performed “Centuries,” “Uma Thurman,” “Sugar We’re Goin’ Down,” and “The Last Of The Real Ones.” You can stream Fall Out Boy’s whole Celebrity Session here.

We’ve been waiting to cover this one since it first got stuck in our heads ⚡️⚡️⚡️ https://t.co/V6F5fGepEG

Ariana Grande may have sparked this performance, as she had a little sing-along on her Instagram story to “Sugar We’re Goin’ Down.”

And then again, she covered “Dance, Dance” in a game of song association with ELLE while promoting her new album, Sweetener, out later this month.

This is all ahead of Fall Out Boy’s tour for Mania, heading out across North America later this month with Machine Gun Kelly, Gym Class Heroes, Every Time I Die, and State Champs.

The tour is set to run through the first bit of October, spanning from New York to New Orleans, and a hometown date at Wrigley Field in Chicago with Rise Against. Even before that run of dates though, the band is scheduled to headline Reading and Leeds just a few days before. Check out all of their upcoming tour dates and who is opening for them, here.

Watch Fall Out Boy’s acoustic cover of “No Tears Left To Cry” by Ariana Grande below & let us know what you think in the comments, or tweet us @Soundigest!