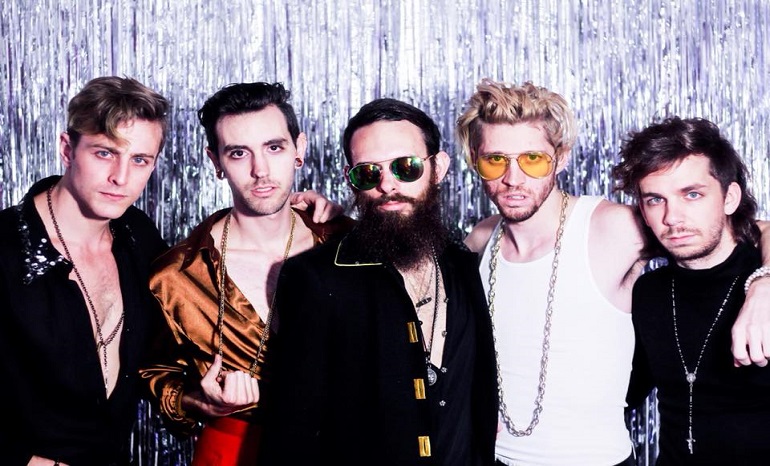 Soundigest got to sit down with Jet Black Alley Cat to discuss their latest release, Motel, tour life, and their musical inspirations.

Congrats on your new EP! Quick question: do you prefer Vinyl or CDs?

Christian: I’ve always been a fan of Vinyl, having something tangible with so much character like a record.

Your EP Motel was just released. Can you tell me more about the inspiration behind it?

Jet Black Alley Cat: The band and our songs are a product of where we were at in life at the time. We were searching for a renewed sense of eagerness and spirit just in general. We had stayed in a couple of motel rooms back to back on a set of dates in the middle of the writing process when that feeling of being young and running wholeheartedly after what you want started to consume us. All the songs are about feeling strong. We wanted those who listen to the record to be encouraged as well and know that sometimes we fall into slumps but that’s part of the process. Be strong in those moments. Find ways to keep yourself motivated and pursue your dreams that may feel so far away still. Be young and feel young. Make mistakes but make them cool.

What are some of your favorite lyrics from the Motel EP? Which ones were the hardest to write?

Joe: “the attention whores that we are” – Miami Baby  “and like Montel told us ‘this is how we do it” – Nightlife  “We’ve given up on this boring life. It’s overrated” – Foolish

JBAC: Those are a few of my favorite lines from each single on the EP. I’d say the toughest to write was “Foolish.” I had written the second verse first actually and loved it so much that when I circled back around to write verse one, I knew it was going to be a challenge to write something I liked even more. So it took a second to get it right.

It also starts out with a monologue called *The Cathedral Monologue. Why did you choose to go that route? What was the catalyst for that?

Joe: From the beginning, it was clear to us this record wouldn’t be very traditional. Our intentions were to put together a collection from top to bottom that told a bit of a story and was encouraging to those who listened.  MOTEL was what we were living and we wanted to put it in story form. So the monologue was an idea we had to set up what was to follow. I wasn’t sure if it was going to work at first but once I finished writing the words in the cathedral I was spending that Saturday in, I knew we had a pretty good chance of this actually working for the EP.

Since you guys are about to head out on your The Lovers, USA tour … What is your one must-have item for touring?

Christian: Without using the standard must-haves (deodorant, toothbrush, etc) I would say some type of alcohol. You can always solve a hot day in the van with a good drink.

Since the first single off of an artist’s EP or album often tells the first part of the album story. Why did you choose “Miami Baby” to do that?

Joe: It was the first song we wrote for the record and each of us could feel it would be the centerpiece of our next project. We didn’t really know what kind of project it would be, but we knew it would be our beacon somehow. “Miami Baby” has a contagious energy about it – exactly like we wanted the EP to have. Lyrically it says, almost to the T, the idea of the whole project: “everything I see is, everything I want.” This song just became our beacon of a youthful uprising.

What music has been playing on repeat for the band? What artists have you guys been digging lately?

Joe: Honestly a lot of older music. The Bee Gees, INXS, Aerosmith, and then I’ve been spinning the Dirty Dancing, Top Gun & Space Jam soundtracks. Kind of an odd point of life, ha.

What or who has had the biggest influence on your musical journey?

Joe: Amy Winehouse, Kanye West, NSYNC, Johnny Cash, Dirty Dancing, Grease, Top Gun and other films that are driven by color and emotion built through the sounds that accompany them.

JBAC: I don’t really know if it fits or so not. I think that’s up to each person who listens to us to decide. I can tell you we chose that photo because it was taken from our favorite night during the making of Motel at a spot in St. Augustine. That night turned out to be more than we could have dreamed and really created the vision for the record as a whole. I’ve always valued the importance of cover art. We spend quite a bit of time deciding art for each of our projects. This time though, once we saw this particular photo we really had no question as to what we wanted to use.

Joe: first three to come to off the top of my head are Santi by The Academy Is, 808’s & Heartbreak by Kanye West, and Thriller by MJ

Christian: Born in the USA by Bruce Springsteen

Dream concert venue to play at?

JBAC: We hope you take the time to check out our band.  We promise to not disappoint – come to see us on the road and live the JET BLACK life.