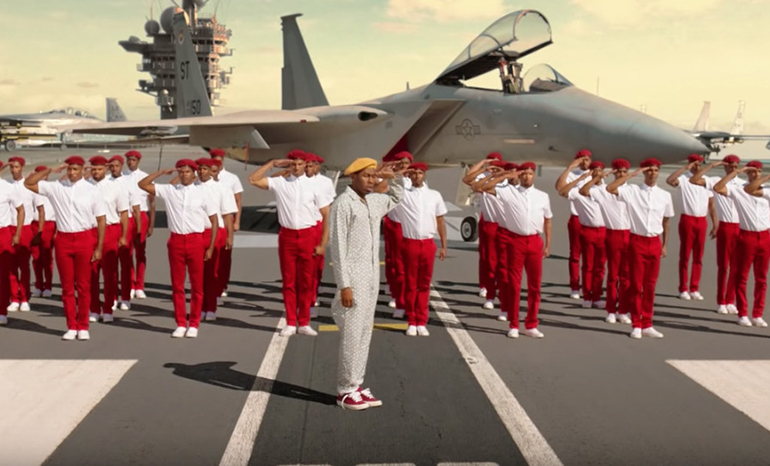 Tyler, The Creator has been on a roll lately with a string of new releases. This includes his song “Potato Salad” with A$AP Rocky, and remixes of Lil Baby’s “Yes Indeed” and Playboy Carti’s “R.I.P.” Last week, he graced us once again with his music video for “See You Again” featuring Kali Uchis. The song was fan favorite from his 2017 Grammy nominated album, Flower Boy.

Tyler made it known on Twitter that he had been sitting on the video for some time as he wasn’t originally planning on releasing it to the public. However, last week he finally decided to drop it, and we’re so glad that he didn’t keep it to himself! Directed by Tyler himself under his long running Wolf Haley alias, the Navy-themed music video is a visually stunning feat that left fans in awe.

The video opens with a cameo from A$AP Rocky, Tyler’s frequent collaborator, as the two prepare for the day ahead. Tyler later peers through an open window and the camera pans to reveal that he’s onboard a naval vessel. We then see Kali Uchis out at sea on a nearby boat, where she lends her voice to the chorus of the song while wearing a heavy yellow raincoat. The video closes out with Tyler dressed as a ghost and rapping a portion of another Flower Boy track titled “Where This Flower Blooms.”

While fans have speculated that the video tells the story of what romance is like between a sailor and their significant other back on shore, Tyler himself has said that the video has no significant meaning. Watch the new video for “See You Again” below and let us know what you think in the comments or tweet us @soundigest.