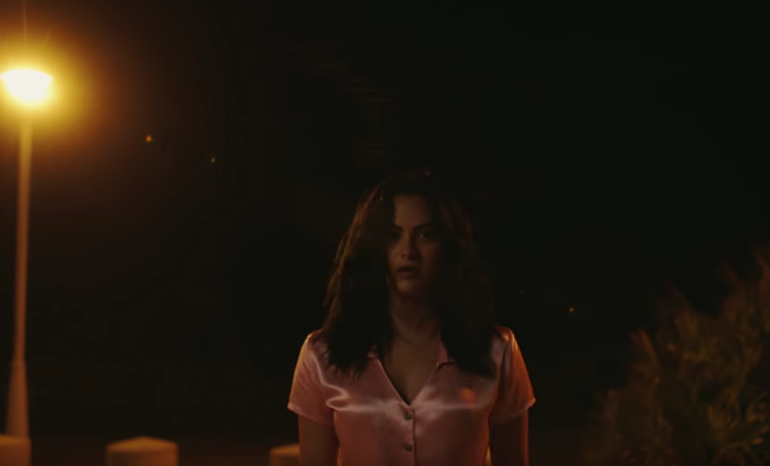 The Chainsmokers dropped their music video for their latest single, “Side Effects,” which features lead vocalist Emily Warren. Fans may recognize a familiar face in the video because Riverdale‘s Camila Mendes shines as the lead subject. In fact, both Andrew Taggart and Alex Pall, the men behind The Chainsmokers, and Emily Warren, are only in the video for a few seconds.

The video opens with Mendes’ character, Riley, answering the phone. Donning a hotel uniform, Riley hears from her boss that she’s going to be working over the weekend. She hangs up the phone in silent anger and then walks through the halls, tearing off her uniform to reveal a pink blouse and a long, floral skirt with sneakers. “Side Effects” begins to play as Riley dances her way around the outside patio and pool area; she even frolicks behind a couple in the pool kissing.

Riley doesn’t stop there. A GOP officer stands surly near the pool area and Riley dances around him, even trying to get him to join her at one point. He remains relatively stoic despite her silly facial expressions and general carefreeness. The camera then pans through the hotel, showing various guests dancing, weight lighting, and even vomiting to the beat of the song. One of these guests is vocalist Emily Warren; two of the other guests are Andrew Taggart and Alex Pall. Warren is seen with a red robe on, Taggart is dancing in his room solo, and Pall is throwing a pillow at two other female guests.

We return to Riley who is walking through a row of bushes outside while fireworks go off behind her. She then runs and dances through more rooms in the hotel which have now been adorned with multi-colored balloons. The room lights change from red to blue to orange to pink to yellow as Riley makes her way through them. Ultimately, she jumps in the pool, fully clothed, and swims. When she emerges, the camera cuts to her walking down the streets of Los Angeles with her hair wet, smiling up at the sky.

“Side Effects” is one of the Chainsmokers’ more fun videos. The concept is cute and appropriate for everyone of all ages to enjoy. There is something about watching a person frolic and dance through a hotel that is infectious and thoroughly enjoyable.

See all the fun for yourself in the music video below!