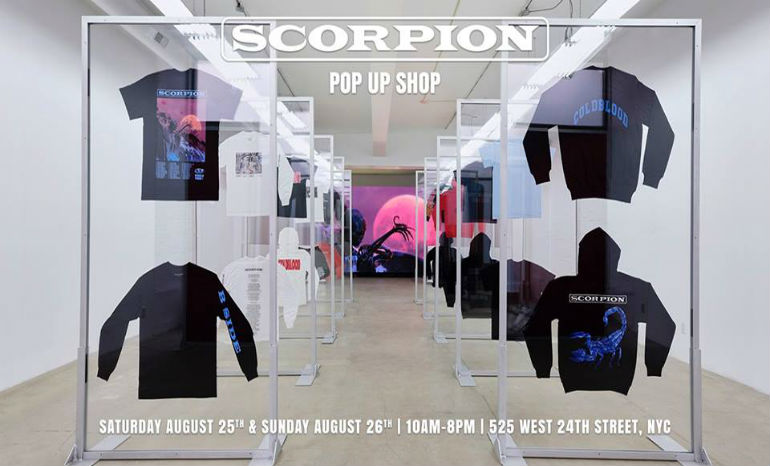 Many artists have opened pop-up merchandise shops as both an extra source of income and to generate buzz. Sometimes, these shops are created to promote an upcoming album or tour dates. What’s so special about these stores is they often have one of a kind things for sale like signed items and merchandise that isn’t available at concerts or on artists’ online stores.

To promote his four-night run at Madison Square Garden in New York City, Drake set up a pop-up shop this past weekend with exclusive merchandise, which also promoted his Scorpion album. These items were exclusively made for the shop, so even if a fan didn’t have tickets to his show, they could still buy some of his merchandise.

Check out four other musicians who’ve decided to go brick and mortar!

In 2016, West opened up pop-up shops in 21 cities around the world to promote his Life of Pablo album. He had lots of exclusive items like an album themed jacket and hat, a T-shirt he wore on Saturday Night Live, and even a zine!

They’ve had multiple shops over the years; in New York City and Chicago in 2015 and in New York City in 2018, all to promote their tours. Foo Fighters also opened up a shop this past weekend for their October CalJam Festival in California. Fans were treated to not only a free performance by Foo Fighters drummer Taylor Hawkins’ band Chevy Metal but also by a band called The Holy Shits. Who are they? They were actually a name used to disguise the real Foo Fighters so that fans would have an epic surprise!

In honor of her 2013 album Artpop, Lady Gaga opened up pop-up shops in New York City and Los Angeles. Available merchandise included Artpop shirts and music. It displayed Lady Gaga trademark items like her infamous meat dress from the 2010 MTV VMAs. The shop was also interactive; there was blank wall and art supplies as well as a makeup station in which fans could interpret their own ”artpop.”

The band has had quite a few pop-up shows over the years including a John Varvatos collaboration at New York City’s CBGB in 2016. Varvatos designed exclusive t-shirts and leather/bomber jackets for the shop. Also available were tour shirts, vests, jackets, and trucker hats to promote their Not In This Lifetime… tour, as well as a chance to win VIP tickets to the band’s New Jersey show.