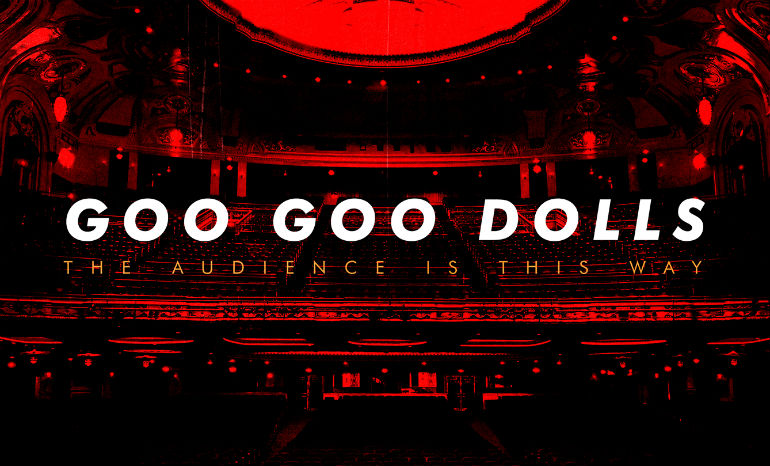 The Goo Goo Dolls are back and better than ever with their newest album, The Audience is This Way! The live album consists of some of their greatest hits like “Slide” and “Iris.” It comes after over 20 years of mainstream success and is made up of recordings from recent tours, most notably including tracks from their 20th anniversary tour of their Dizzy Up Girl album.

The Goo Goo Dolls have had an impressive history in the alternative and commercial music scene. The Buffalo natives first started out in 1986 when guitarist/vocalist Johnny Rzeznik and bassist/vocalist Robby Takac joined up with drummer George Tutuska to create what they called “a garage rock band.” From there, they played punk rock gigs. Eventually they toured across the country opening for 1980’s punk bands. It wasn’t until the group released their single “Name” that they began to see great commercial success. This started their transformation from garage rock to popular alternative rock band. Since then, the group has continued to find success with their phenomenal song “Iris.” The song itself spent 18 weeks on the Billboard Hot 100 chart with four weeks at No. 1, solidifying the bands household status.

The Audience is This Way sounds like the Goo Goo Dolls’ homage to their fans. The title itself points to the audience as being an important part of their journey. It also immediately shows off the live aspect of the album. Instead of being recorded in one go, the album itself includes 10 tracks that have been recorded during their most recent tours. The album was also released on limited edition vinyl on July 21st as part of Record Store Day. There were only 3,000 pressings and the album itself just became digitally available on August 24th.

The album starts out strong, announcing the band in a robust voice promptly followed by “Long Way Down.” You can feel the energy of the band and the crowd just in the opening of this first song. Towards the end, the track easily transitions into the bands hit “Slide.” The track itself brings a sense of nostalgia to the album. The crowd sounds electric during this song and it’s easy to hear them singing along to the familiar lyrics. “Slide” is one of those songs that anyone can recognize and enjoy, and for some reason, it just reminds me of being in car rides as a kid.

The fact that the band chose tracks from different shows to put together this album really shows. It’s easy to hear different colors and senses of energy coming through every track. It’s as if you can feel that you’re at a different show with every seamless transition. It makes the at-home listener feel like they are experiencing the live show, which not all live albums can necessarily accomplish.

The energy continues through the entire album and comes across the familiar “Iris” towards the end. However, it opens with an unfamiliar beginning. The slow intro makes it hard to know exactly what song is about to be played, but the crowd’s constant cheering makes you realize what’s about to come. This live touch makes the track feel more special than the radio version. It allows the listener to really feel as though they are a part of the show.

Overall, Rzeznik doesn’t miss a beat with his smooth, low vocals. Collectively, you can feel the cohesive nature of a band that’s been playing together for over 20 years. Together, they have created a live experience on recorded album. The live energy of the iconic group comes through the headphones of the listener and creates a nostalgic rock experience. Check out the album HERE: