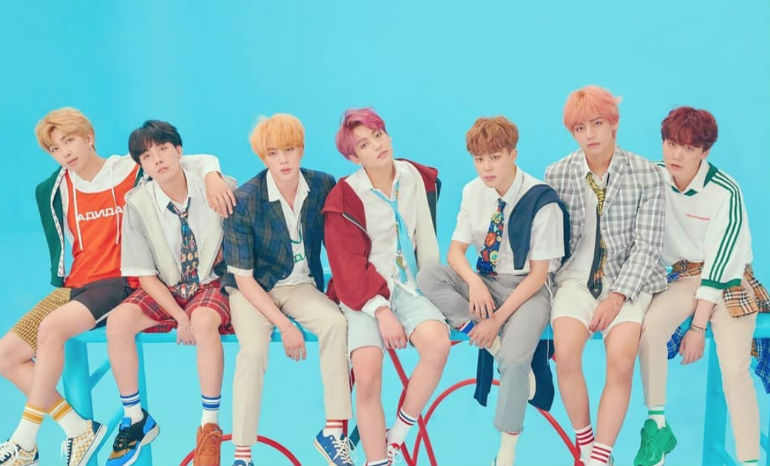 The first installment of BTS’s Love Yourself trilogy debuted a year ago, and the end of the era has been marked with the release of the third and final album Love Yourself: Answer on August 24, 2018. From the beginning, BTS has hinted that Love Yourself is much more than a series of albums, teasing the project with a dramatic short film labeled as a “highlight reel” with the traditional Chinese characters “’起承轉結.” These four words would later be included in the titles of the albums and a handful of songs, and together they represent the 4 acts of a narrative plot structure – Introduction, Development, Climax, and Conclusion. With 2 sides and a total of 26 tracks, Answer is partially a repackaging of the previous two albums, Her and Tear, but listening to the sixteen tracks of the first disc sequentially reveals the arch of a complicated love story.

We start off with “Euphoria”, an ebullient electronic track that depicts the exhilaration of being with the one you love. The song radiates with joy in its EDM-like synths and bass, and Jungkook’s airy vocals and sustained high notes paints a clear vision of the brilliant utopia described in the lyrics. Following this prologue is “Trivia 起: Just Dance,” a track that reverberates with the same funky rhythms heard on J-Hope’s mixtape, Hope World. As the marker of the Introduction phase, “Just Dance”  is about giving into the moment and diving right in. Next comes “Serendipity”, Jimin‘s ethereal solo, and “DNA,” tracks originally released on Love Yourself: Her. Although they differ in musical tonality, both focus on the role of destiny in how a relationship comes to be. “Dimple,” another re-released song, then touches on the intoxication associated with being in love.

In track 6, we finally reach the Development stage with “Trivia 承 : Love,” a solo song by rapper and leader RM. “Love” emerges from the honeymoon mindset, and both this and the following track, “Her,” reflect on how a relationship changes a person. The story reaches a pivotal point in V’s “Singularity,” when pain and confusion take hold and the narrator realizes that he no longer wants to endure this “Fake Love.” The sentimental “The Truth Untold” is then followed by “Trivia 轉: Seesaw,” which symbolizes the turning point of the narrative. Fans get to hear a new side of rapper Suga in this mellow track as he sings about the instability of a relationship. “Seesaw” is followed up by “Tear,” an intense track from the rap line initially released as the outro to the album of the same name.

In Jin’s solo, “Epiphany,” the narrator reaches an emotional peak with the realization that he had been trying so hard to love another person that he had neglected to love himself. The dramatic ballad, which had its own music video, rises and falls with Jin’s expressive croons. The next track, “I’m Fine” samples BTS’s hit “Save Me,” but instead of a cry for help, the high-energy song is a declaration of optimism and self-assurance. It leads perfectly into “IDOL”, a fast-paced track with South African and Latin influences. BTS is known for their unapologetic nature in both the content and style of their music, and “IDOL” is a prime example. While the song fits into the story’s theme of self-love, it’s also the band’s nod to the industry that created them and an affirmation that they won’t compromise who they are for who others want them to be. The album also includes a version featuring Nicki Minaj, an unexpected yet fitting collaboration considering the rapper’s unabashed approach to her own music.

While Love Yourself: Answer doesn’t maintain a consistent sound, the versatility of tone from track to track illustrates the emotional rollercoaster of a relationship, mimicking the ups and downs through the instrumentals and lyrics of each song. The album also serves to demonstrate the versatility of the group, allowing each member to show off his own musical style through solos. The sixteenth track, “Answer: Love Myself,” features all seven members and draws the story to a close. It’s a song about absolution, forgiveness, and moving on, with the ultimate lesson being to love yourself.

One thought on “BTS Delivers a Story with a Message in Love Yourself: Answer”