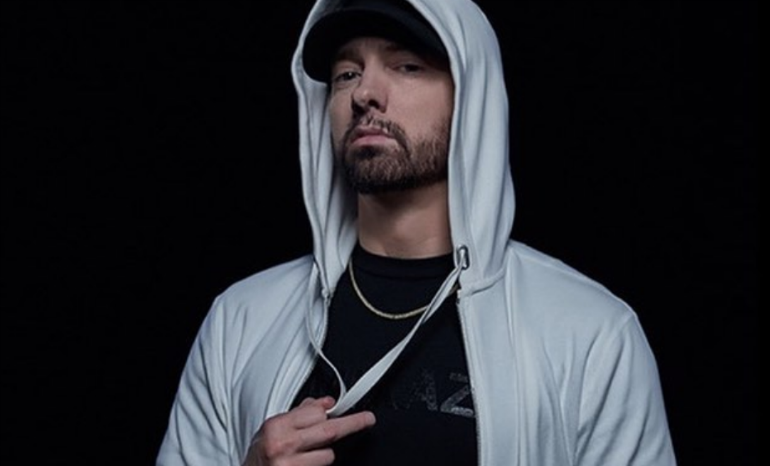 Eminem is back! The rapper dropped a new song appropriately titled “Venom” from the upcoming Venom movie. The track is also included on the brand new surprise album that Eminem released last Friday, Kamikaze. He teased the song on his social media accounts with a 15-second clip before the full album dropped officially the following day. The clip featured the lyrics, “Venom, knock, knock, let the devil in”, followed by the sounds of an animal roaring and a man crying out in pain in the background.

The song is the 13th track on the tracklist for Kamikaze, closing out the album. What’s interesting about the chorus is that the rhyming “in em (venom)” has Eminem making a rolling sound with the tongue like Venom’s tongue sticking out, which is what Venom is primarily known for.

It’s important to know the story of Venom to understand the rapper’s lyrics. Venom is a Marvel villain/anti-hero who has the ability to eat people with his extremely long tongue. He is created when an evil symbiote attaches to its host, Eddie Brock. The symbiote/parasite quite literally lives inside him, making him evil.

“Ready to snap at any moment/I’m thinkin’ it’s time to go get ’em/They ain’t gonna know what him ’em/W-w-When they get bitten with the Venom,” spits Eminem, meaning that anyone who comes too close to Venom will either get eaten or damaged so quickly to the point where they won’t know what happened to them.

The majority of the song sees Eminem comparing himself to the evil symbiote. The lyrics suggest a nod to Eminem’s alter ego, Slim Shady; Shady is the one who since practically the beginning of Eminem’s career is the one who spits homophobic slurs, hate, threats, and is generally angry. “Knock, knock, let the devil in,” could easily be Eminem saying he’s letting in Slim Shady, but it can just as easily be a reference to the symbiote/parasite that Eddie Brock “lets in” to his body. Eminem also alludes to several of his earlier work and highlights the story of how his career began and came to be.

I find the song unique because it’s not your typical movie soundtrack song. Eminem has created a song that not only fits perfectly with the theme of the Venom movie and its character but also alludes to and highlights his own personal rap career and his alter ego. That being said, the song can’t be appreciated to its full extent if the listener isn’t familiar with Eminem and his claim to fame.

Let us know your thoughts in the comments below – is “Venom” a future hit?